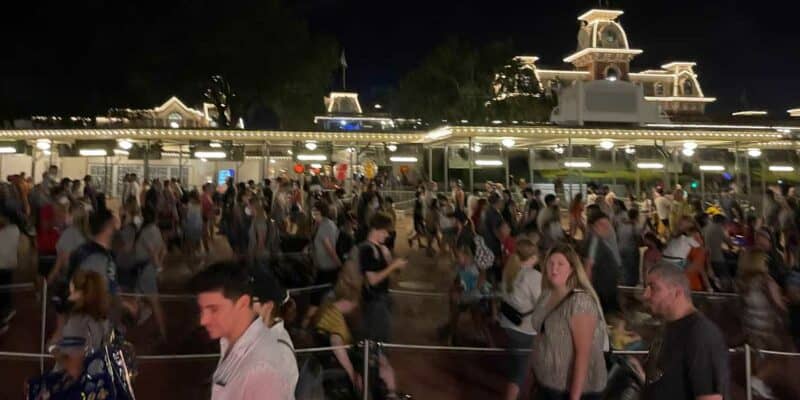 Ever since the pandemic began, some feel that Guests visiting the Most Magical Place on Earth have become rude and disrespectful. In fact, they have found more parties trying to cut in line as well others getting into fights while visiting the Parks.

Now, one Disney World Guest is telling their story and experience, expressing how disappointed she is in others and how it ruined her vacation.

One Walt Disney World Guest posted to Reddit, sharing her recent experience at the theme parks. They planned a trip to go for the 50th anniversary with their father, who is 62 years old. This vacation was special as their father first came to the parks in 1972 with his grandmother, and Disney means a lot to both of them because of that. “I wanted to have a good time and make some good memories with my father,” they write.

They continued to explain that although Disney’s Hollywood Studios, Disney’s Animal Kingdom, and EPCOT were all amazing, Magic Kingdom was not magical at all:

Magic Kingdom was the worst it has ever been today. Every ride we went on and show we saw, the people were extremely rude and talked out loud through the whole thing. Jungle Cruise was so bad I couldn’t even hear the skipper. People were throwing their trash on the ground and overall disrespectful. It all finally bubbled over for me at Carousel of Progress. That ride, above all else, is our favorite. It is a special place and means a lot to us. The WHOLE show people talked over it, texted, and let their kids get up and run (even for so bad they had to stop the ride to tell people to remain seated). I left the ride and just started crying.

They continued to write:

All this to say that I think post-pandemic Disney is not only different because of COVID, the people are worse. It just felt awful today. If you’re a Disney Parks fan, just be prepared for what you’re in for. I love this place, and I wish other people could respect that. Am I alone here? Sorry for the rant.

Another Reddit user was quick to chime in, expressing that they have noticed an increase in rudeness from people everywhere, not just at the Disney Parks:

Definitely not limited to Disney or theme parks. My wife has worked in various customer service jobs her whole life (restaurants, hotels, catering, local banking). She recently took a pay cut for a work from home position that isn’t customer facing because she couldn’t take the people anymore. Routinely getting screamed and cursed at. While this was not unheard of for her prior to covid, it elevated to an entirely new level post-covid. And her experience is far from unique.

And a Florida local chimed in as well, expressing their recent experiences at Walt Disney World, writing:

I’ve said it before here and I’ll say it again, you’re absolutely not alone in noticing how awfully guest behavior has gone downhill during this time. I’m local as of 8 years ago so I’ve definitely seen some stuff and been through tons of different crowds (multiple NYE’s at Magic Kingdom, Star Wars Weekends, 24 Hours at Magic Kingdom, etc.) and, personally, lately it’s been the worst I’ve ever seen it.

Please note that Disney Cast Members and security officials are always at the theme parks in order to maintain a safe environment as much as possible. If you ever witness activity such as a fight or Guests acting inappropriately, or if you are ever concerned when visiting one of the Disney Parks, be sure to find the nearest Cast Member or report your issue with Guest Relations, located in each of the Disney Parks.