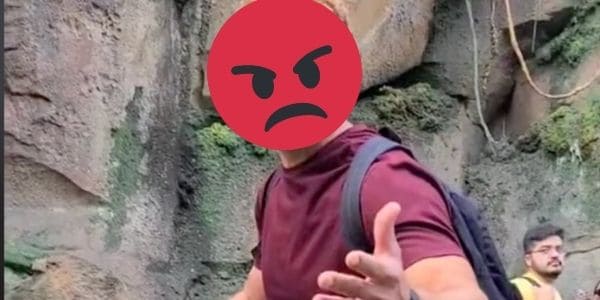 When Guests go to Walt Disney World, they must always recognize that there are rules and regulations that must be abided, such as waiting in line for attractions.

Walt Disney World offers many rides, restaurants, shows, and attractions at the four Parks. At times, the selection can be overwhelming which may cause stress for some Guests, especially when lines are long. Wait times can end up being hours long for attractions like Seven Dwarfs Mine Train or Peter Pan’s Flight, but if a Guest chooses to enter the queue, they will have to wait in the order in which they entered.

Troost (@troost123456789) posted a TikTok yesterday showing an altercation in which a Guest appears to be cutting in line for Avatar Flight of Passage at Disney’s Animal Kingdom. The poster of the TikTok noted the wait time had hit over an hour. Please be warned that there is vulgar language used in the video. Viewer discretion is advised.

The TikTok starts with a Guest asking the man who is seemingly cutting in line stating “Is he threatening you?”. This question is followed by the Guest reaching out and grabbing the other Guests near him. The Guest who was moving through the line stated, “You don’t understand, my father is waiting for ME”. The Guest who was seemingly cutting in line eventually walks away after ending the heated exchange with, “It’s not your problem”. There is a chance that the Guest was attempting to find the rest of his party which may have been further ahead in line, however, from the communication displayed in the video, that was not said.

Disney World is located on private property and therefore can operate under its own rules and regulations. Guests who are unable to follow these rules are at risk of being removed from the park, or worse, depending on the situation at hand. Please be sure to always be aware of the rules set out by Disney before your visit to ensure you are not creating an unsafe or negative environment for Guests and Cast Members.

Have you ever seen or witnessed someone cut in line at Walt Disney World?