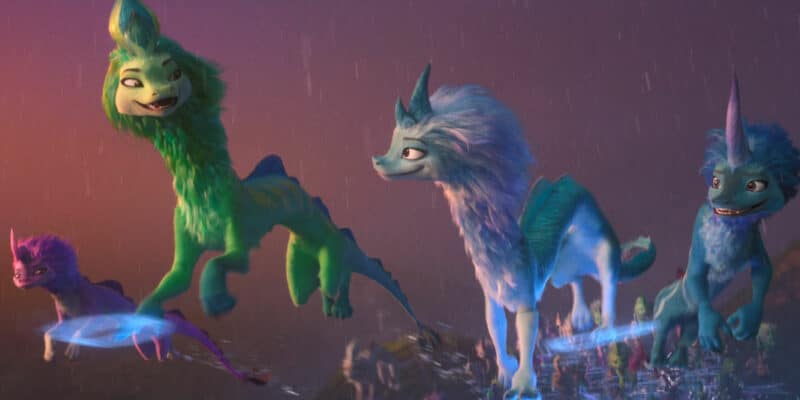 When you think of Disney’s Animal Kingdom at Walt Disney World Resort, you probably think about real wildlife, like the dozens of species of animals that live on Disney’s Harambe Wildlife preserve, which Guests can experience on the popular Kilimanjaro Safaris ride.

The Guest-favorite attraction is officially described as:

As thrilling as the Disney World safari is, however, Disney’s Animal Kingdom was originally supposed to be very different! Instead of featuring various real lands like Africa and Asia — with the notable exception, of course, of Dinoland, U.S.A. — the theme park was supposed to be comprised of three sections based on animals that currently exist, animals that previously existed (this is where Dinoland comes into play today), and fantastical animals that never existed.

Did you ever wonder why there’s a mythical dragon on the logo for Disney’s Animal Kingdom? Originally, the plans for the park consisted of three themed areas: animals that exist, animals that are extinct, and animals that never existed. While live animals and dinosaurs made it to Animal Kingdom, the third themed area, Beastly Kingdom, never came to fruition. The area was supposed to feature unicorns, dragons, and a dark ride based on the Disney film “Fantasia.” Imaginary animals are now represented at Animal Kingdom through the yeti on Expedition: Everest and the “Avatar”-themed land Pandora.

Athough it was ultimately vetoed by iconic Walt Disney Imagineer Joe Rohde and his team, Beastly Kingdom — which was ultimately turned into Camp Minnie-Mickey and, subsequently, Pandora: The World of Avatar — sounds like it would have been amazing.

The section was to feature realms surrounding “good” and “evil” creatures. The good realm would have been home to an attraction called Quest of the Unicorn, which would have been a mythological maze leading to the grotto where the unicorn lived. The good realm would also have featured Fantasia Gardens, an attraction based on the movie Fantasia, that would have been a musical boat ride that takes you the animal scenes of the movie. The idea, similar to The Many Adventures of Winnie the Pooh, would have featured hippos and alligators from “Dance of the Hours” along with pegasi, fauns, and centaurs from “Pastoral”.

In addition, a restaurant called Loch Ness Landing was supposed to exist in the forgotten land.

Although Beastly Kingdom never came to fruition, Walt Disney Animation Studios’ movie, Raya and the Last Dragon (2021), offers all sorts of potential for dragons to finally make their way to Disney’s Animal Kingdom in the not-too-distant future.

Related: Missing the 50th Anniversary at Disney World? You Don’t Have To!

Some fans, for example, have speculated that the movie could eventually become the basis for a new nighttime spectacular at Disney’s Animal Kingdom now that Rivers of Light has officially ended.

There is also the potential for Dinoland, U.S.A. to morph into a Raya and Sisu-themed area, as a permit for construction on the former site of Primeval Whirl was recently filed — though no additional details have been shared at this time.

Nonetheless, as the Disney catalog continues to expand with films like Raya and the Last Dragon and Pixar’s Onward (2020) — both streaming on Disney+ — there is little doubt that bits and pieces of what would have been Beastly Kingdom will make their way back into Walt Disney World Resort in magical and mystical ways.

Did you know about Beastly Kingdom?