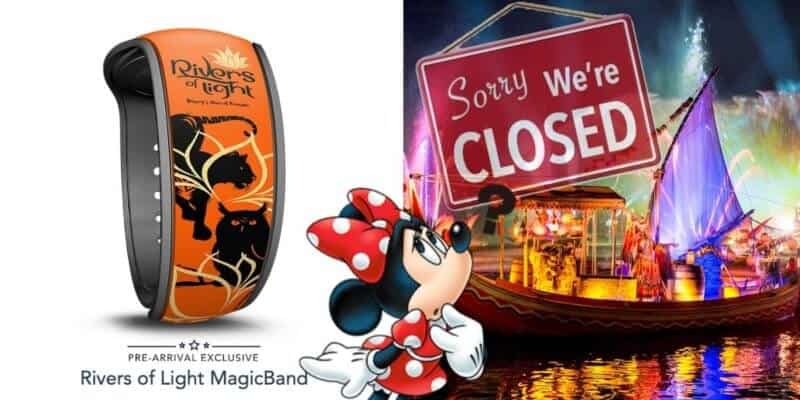 Rivers of Light at Disney’s Animal Kingdom at Walt Disney World has permanently closed, but an interesting development has occurred.

In case you aren’t familiar, Rivers of Light made its debut on February 17, 2017. Then in May 2019, it had an update titled Rivers of Light: We Are One at Disney’s Animal Kingdom and brought “a powerful arrangement that inspires and carries us through moments of discovery, fun, friendship, fear, love and family.”

Unfortunately, in July Inside the Magic reported that Disney would be permanently closing this nighttime show, along with two other attractions — Stitch’s Great Escape and Primeval Whirl.

However, Inside the Magic noticed something a bit strange while looking at MagicBands on the Walt Disney World website.

When looking at the MagicBand options, we noticed that there is now a pre-arrival exclusive Rivers of Light themed MagicBand. The pre-arrival price on this MagicBand is $20 when it would normally cost $29.99, so it’s not a bad deal — but it definitely has us a bit confused. Why would Disney be promoting a nighttime show that has been permanently closed?

It could be because they had leftover merchandise already ordered prior to the announcement that Disney is now trying to get rid of, which, if that’s the case, is totally fine with us because the Rivers of Light merchandise is gorgeous!

It is also important to keep in mind at this time Disney has not yet officially released a statement on the closing of Rivers of Light. And, Walt Disney World Resort is discontinuing complimentary MagicBands for Disney Resort hotel Guests in 2021.

The official Disney description of the former show reads:

What are your thoughts? Will you be purchasing a Rivers of Light MagicBand? Let us know in the comments.
Click here to book your next Disney trip!