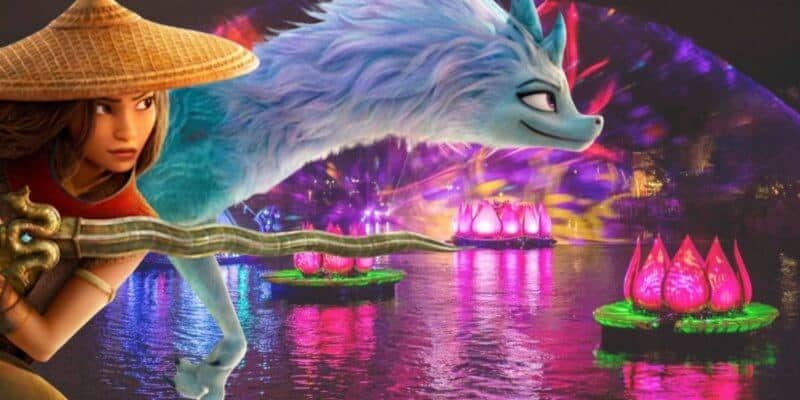 The newest Walt Disney’s Animation Studios movie, Raya and the Last Dragon, is a fantasy adventure set in a land inspired by the cultures and environments of Southeast Asia. It follows the very first Southeast Asian Disney Princess, warrior Raya, and her sidekick, Tuk Tuk, as they must track down the last dragon, Sisu, to help stop the evil Druun.

If you haven’t yet seen the film, the official synopsis reads:

Long ago, in the fantasy world of Kumandra, humans and dragons lived together in harmony. But when sinister monsters known as the Druun threatened the land, the dragons sacrificed themselves to save humanity. Now, 500 years later, those same monsters have returned and it’s up to a lone warrior, Raya, to track down the last dragon in order to finally stop the Druun for good. However, along her journey, she’ll learn that it’ll take more than dragon magic to save the world—it’s going to take trust as well. From directors Don Hall and Carlos López Estrada, co-directors Paul Briggs and John Ripa, producers Osnat Shurer and Peter Del Vecho, and featuring the voices of Kelly Marie Tran as Raya and Awkwafina as Sisu.

After the positive reception of Raya and the Last Dragon, and with the announcement that Rivers of Light at Walt Disney World would not be returning, some are now calling for the film to be the inspiration for a new nighttime show at Disney’s Animal Kingdom.

What Was Rivers of Light?

In case you aren’t familiar, Rivers of Light made its debut on February 17, 2017 and had an update titled Rivers of Light: We Are One in May of 2019 at Disney’s Animal Kingdom. This show brought “a powerful arrangement that inspires and carries us through moments of discovery, fun, friendship, fear, love and family.”

At the time it premiered back in 2017, Disney noted that the nighttime entertainment offering “celebrates the majesty of nature and the connection between animals and humans, combines live performers, floating lanterns, fountains, special effects and animal imagery, giant water screens and more.”

It was announced last year that this nighttime show would not be returning to Disney’s Animal Kingdom. So, is there hope for a new show inspired by Disney’s Raya and the Last Dragon?

One Reddit user shared their thoughts as to why Raya and the Last Dragon should get representation in the theme park and why having the animated film take over as a nighttime show at Animal Kingdom makes the most sense.

While watching Raya and the Last Dragon (which is wonderful), so many aesthetic influences just scream Animal Kingdom to me – beyond the obvious Southeast Asian shared inspiration, I also feel like the color palette and musical score are closely aligned as well.

They went on to explain how the original version of the old nighttime show, Rivers of Light, drew some inspiration from Asian cultures, so having Raya take over wouldn’t be too far off. Additionally, they explain how Rivers of Light was lacking an emotional connection with audiences and Raya could be a perfect way to bring that aspect in.

Rivers of Light was already deeply inspired by Southeast Asia and was pretty, but it was missing an emotional connection with audiences and the technical development issues deprived it of the ‘wow factor’ that a good night time show needs. In some ways, I actually preferred the interim Jungle Book show with live performers, which added a real energy and vitality that Rivers of Light never quite matched.

When the world recovers and it’s time to open Animal Kingdom at night again, I’d really like to see Disney introduce a new nighttime show inspired by Raya and the Last Dragon. Given how prominently water features in the storyline of the movie, a water show is a natural fit for introducing it into the parks, and there’s so much overlap with the old Rivers of Light show I suspect a lot of the floats and props could be “upcycled” to form the backbone of a new show.

By repurposing the old infrastructure, they could focus their investments on adding a few live actors, music, and possibly a new “wow factor” to supplement the water screens that never quite worked as intended. And they could be up and running relatively quickly, in time to actually have an attraction in the parks sooner than it usually takes after a new movie is released.

Personally, I think this makes perfect sense to be added to Disney’s Animal Kingdom, as right now, there is really no other nighttime entertainment aside from the Tree of Life Awakening, which happens periodically throughout the evening after dark. Additionally, since the cultures and environments of Asia already have a presence in the theme park, a show highlighting Raya and the Last Dragon would be a natural fit. And if it took place where Rivers of Light used to, it would also already be in the Asia section of Disney’s Animal Kingdom.

With Raya and the Last Dragon already being such a huge hit among families everywhere, this film could be Disney’s next classic. With that being said, Walt Disney World should start thinking about how to add the film into the parks to draw more people in, and in my opinion, a nighttime show would be the perfect way to do so.

And, if you want to visit Disney’s Animal Kingdom on your next Disney vacation, be sure to get in touch with our friends at Academy Travel, who will be with you every step of the way when planning your magical getaway. Get your free quote today.

Do you want to see Raya and the Last Dragon come in as the nighttime show at Disney’s Animal Kingdom? Let us know in the comments below.