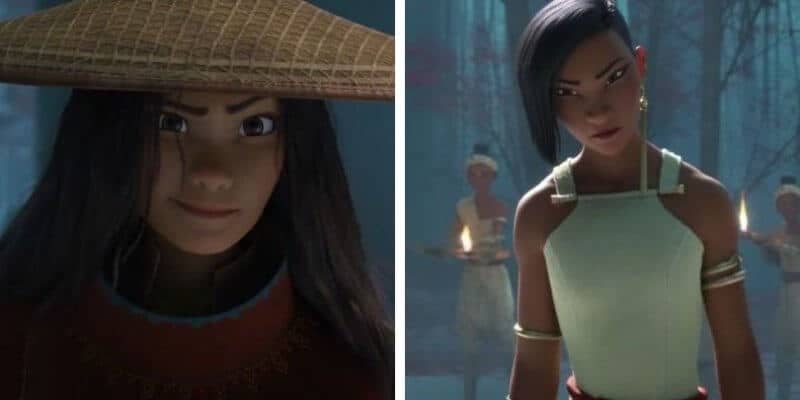 If you went to the movie theaters or paid for Disney+ Premier Access to watch Disney’s latest animated film, Raya and the Last Dragon, this weekend, you weren’t alone.

The newest Walt Disney’s Animation Studios movie is a fantasy adventure with southeast Asia themes and follows warrior Raya and her sidekick, Tuk Tuk, as they must track down the last dragon to help stop the evil Druun. The official synopsis reads:

Some spoilers for Raya and the Last Dragon ahead.

After seeing the film, you may have wondered if this is the first Disney film to represent a gay Disney Princess. Well, the voice actress behind Raya, Kelly Marie Tran, says yes.

Tran recently sat down with Vanity Fair to talk about the latest Walt Disney Animation Studios film, including the fact that there may have been some romantic feelings between Raya and another character, Princess Namaari.

During the film, there is a scene when Raya walks out and meets up with her longtime enemy, Princess Namaari (voiced by Gemma Chan) for battle. As Raya first walks out, she says “Hey there, Princess Undercut,” with a big smirk on her face, “Fancy meeting you here.”

Some thought this was a bit flirtatious and we are now finding out, that was on purpose. Tran told Vanity Fair that when she was recording her voice for the role of Raya, she decided there were “some romantic feelings going on there” between main character, Raya, and Princess Namaari.

Raya is not the first female Disney character to not have a male love interest within the film. She follows both Moana and Elsa –though Elsa is not technically a Disney Princess. Some fans have questioned he sexuality of both of these characters, but Disney has not confirmed anything regarding this issue.

Because of this, many fans feel as though this is just another Disney film to “stop short of presenting a major character as explicitly queer”.

On the other hand, though, queer communities have highly embraced other Disney characters despite being confirmed to be part of the LGBTQ community, Raya has felt like the closest step to representing a gay character within a Disney movie.

Many feel that Princess Namaari, who is obviously well-muscled and has a stunning asymmetrical haircut, was drawn by Disney purposely to represent the LGBTQ community, though this has not been confirmed. “I’m obsessed with Namaari,” Tran told Vanity Fair, “And I’m obsessed with Gemma Chan. So I’m really excited you brought this up.”

Additionally, Tran did want to note that even though she interpreted this Raya and Namaari encounter and their relationship as gay, does not mean that was Disney’s intention when the company wrote the line.

“I think if you’re a person watching this movie and you see representation in a way that feels really real and authentic to you, then it is real and authentic,” Tran said in her Vanity Fair interview. “I think it might get me in trouble for saying that, but whatever.”

As mentioned before, this is not the first time Disney has hinted at a Disney character representing the queer community. In fact, in addition to Frozen’s Elsa, many were quick to believe Josh Gad’s Lefou was romantically interested in Luke Evans’s Gaston in the live-action Beauty and the Beast.

Before the second Frozen film debuted, songwriter Kristen Anderson-Lopez spoke on the topic of Elsa and a love-interest, confirming she would not be getting one and why that was okay. “Like the first movie, Elsa is not just defined by a romantic interest,” Anderson-Lopez explained at the 2019 D23 Expo. “That’s not a story that we wanted to tell at this point in time. What we really wanted to tell was if you have these powers, how do you grow and change and find your place in the world and find answers that haven’t been found before?”

As for Pixar, Onward did feature the company’s first openly LGBTQ character, which many felt was a step in the right direction.

Have you seen Raya and the Last Dragon yet? Do you think Raya is part of the LGBTQ community? What about Princess Namaari? Let us know in the comments below.