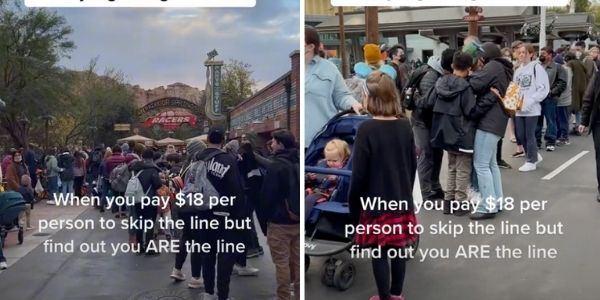 Recently, Disney has replaced its FastPass+ system and has tried implementing several new services for its Guests while in at Disneyland and Walt Disney World.

These services include Disney Genie, Genie+, and Lightning Lane, all of which are designed to cut wait times down for Guests, leaving them with an overall more satisfying experience. This is not the case at times, however, as Disney World Guests have fled to social media to describe how backward the system can actually work in the Disney parks.

In a recent TikTok uploaded by Renee (@momtravels), the Lightning Lane, which should theoretically be fast as “lightning” can be seen completely backed up outside the entrance to Radiator Springs Racers at Disneyland’s California Adventure. See the full video below:

#DisneyPlusVoices #disneyland #disney #fail #ohno or if you have a disability and wait the standby time through DAS. Y’all are lumped together. #fyp

#DisneyPlusVoices #disneyland #disney #fail #ohno or if you have a disability and wait the standby time through DAS. Y’all are lumped together. #fyp

As seen in the TikTok, the Lightning Lane for the Disneyland attraction was incredibly long, possibly longer than the regular stand-by queue. As Lightning Lane tends to cost between $10 and $20, it is understandable why Guests would be aggravated over the length of the line. One user in the comments called this a “big fail”.

Disney’s new Genie+ and Lightning Lane systems have been met with a lot of “constructive” feedback since they launched earlier this year. Many Guests feel as though this system does not effectively replace Disney’s old FastPass+ system and leaves Guests spending more money for less enjoyment. Disney describes Lightning Lane as follows:

For some of our most highly demanded attractions, Lightning Lane entrance access is available to purchase individually. Guests may purchase and select an arrival window one at a time for up to 2 attractions a day. This option is available for all Guests—with or without Disney Genie+ service

What has your experience with Disney’s new Lightning Lane and Genie+ services? Do you think they are a good replacement for FastPass+? Let us know below!