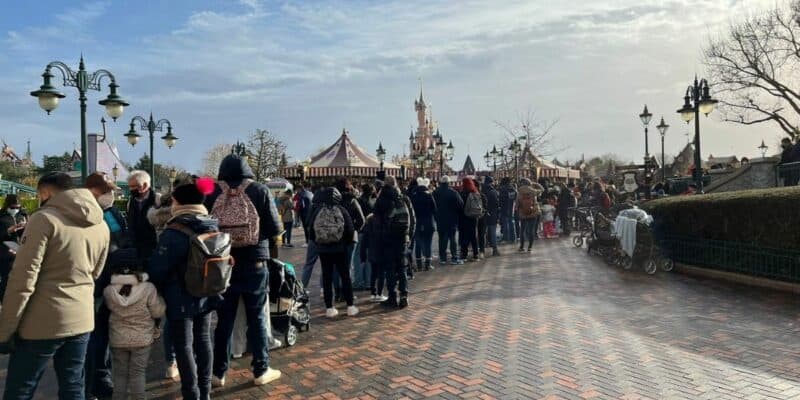 If you are visiting any Disney Park over the next week, get ready for big crowds and long lines.

Traveling during the holiday season is a popular option for many as most adults have extra time off due to the holiday vacation days and kids are out from school. Because of this, there is often an influx amount of travelers worldwide, and of course, all of the Disney Parks see the outcome of this through their Guest count.

Below, we can see that Disney Cave 0f Wonders (@Cave0fWonders) posted a photo of Peter Pan’s Flight line, which is extending through Fantasyland. Around the time of the photo, we looked at the wait times, and it appears that the Guests were likely waiting around 80 minutes for the attractions.

Yesterday, we saw Big Thunder Mountain close down, which caused massive crowds to form in front of the attraction. Now, Peter Pan’s Flight is working, but we can still see that the amount of Guests has not yet slowed down at Disneyland Paris.

If Guests want to skip the line, they can pay the Premier Access cost. This means that they would have to pay per person in their party to skip the standby queue. The prices fluctuate but typically stay around the following:

Seeing these crowds at Disneyland Paris is interesting at Disneyland Paris has been undergoing some changes when it comes to the Omicron variant. The New Year’s Eve party has been canceled, and there is now a chance that vaccinations will be mandatory to enter the Parks, depending on a pending bill put out by the French Government.

At the moment, Disneyland Paris does not expect to shut down, despite rumors noting that it is a possibility.

What do you think of these holiday lines? Let us know in the comments below!