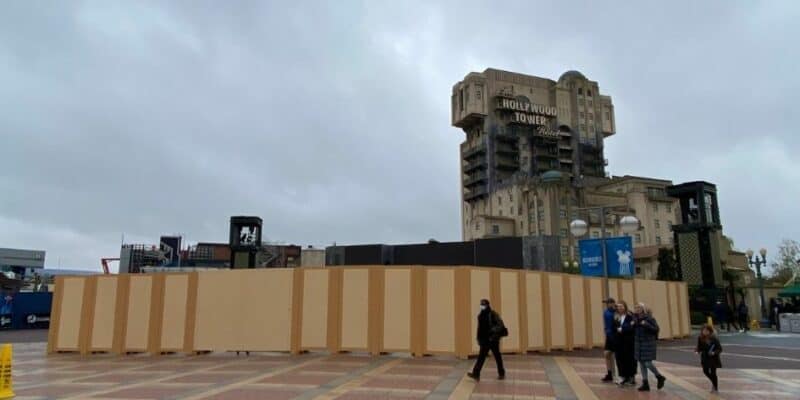 Now, it seems that Production Courtyard, which houses Tower of Terror at Walt Disney Studios Park is closed. CaveOfWonders (@Cave0fWonders) Tweeted a photo of the section blocked off by construction walls as the stage is set for removal due to the Avengers Campus expansion.

Time to say goodbye 👋🏻 to the Production Courtyard scene

Production Courtyard: the zone of possibilities!
Drop in on the abandoned Hollywood Tower Hotel, catch a musical performance with Disney Characters or strike a pose alongside Super Heroes… anything is possible in Production Courtyard

The Twilight Zone Tower of Terror: Going up?
Take one of the last elevators still in service in this abandoned hotel on a terrible stormy night. Stay calm as it ascends each floor, because the fall will be… out of control!

Selfie Spots: meet your heroes!
MARVEL Super Heroes, Frozen heroines and other Disney Characters just love being in Walt Disney Studios Park! Pose alongside Spider-Man, Iron Man, Elsa, Anna or Olaf before they set off again to save… the world, or the kingdom of Arendelle. Who will you see this time?

Musical show: The Disney Junior Dream Factory show
Discover the nuts and bolts of musical dream-making and unleash the magic of song and dance with Mickey and friends!

Stitch Live! A close encounter of the third kind
Cowabunga! Get silly with the adorable blue creature himself. Stitch brings you this hilarious show from the far reaches of the galaxy!

Luckily, all of this ongoing construction is not causing any halt for Guests looking to ride Tower of Terror.

Are you happy to see Production Courtyard remove their stage? Let us know in the comments below.