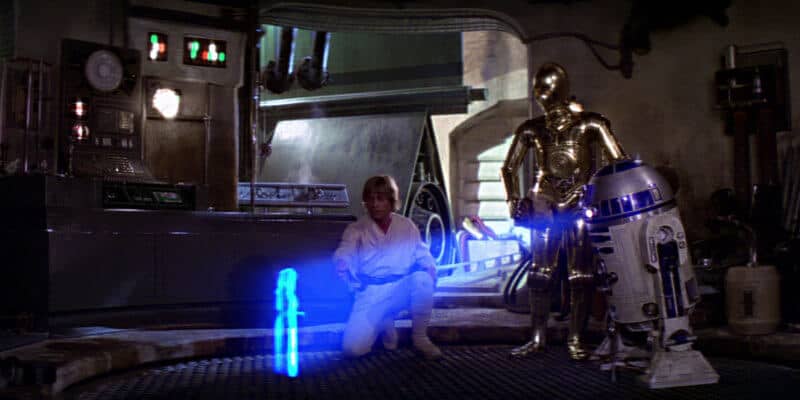 Now, of course, A New Hope has given rise to an entire cinematic universe that consists of the nine Skywalker Saga films, two standalone Disney movies — Rogue One: A Star Wars Story (2016) and Solo: A Star Wars Story (2018) — and numerous television series, including Jon Favreau and Dave Filoni’s hit, The Mandalorian.

Despite the success of the Star Wars franchise, Lucas himself has never been fully satisfied with the galaxy he created. This inspired him to go back to the drawing board in the mid-1990s, a decade-and-a-half after the original trilogy ended with Star Wars: Episode VI – Return of the Jedi (1983) and a few years before the prequel trilogy began with Star Wars: Episode I – The Phantom Menace (1999).

This reassessment led the Lucasfilm founder to release “special edition” cuts of his original films, including a version of A New Hope that includes a scene [above] with Ford’s Solo, legendary bounty hunter Boba Fett, and Jabba the Hutt.

On January 31, 2022 the special edition of the first Star Wars movie celebrated 25 years since its release in 1997. At the time it debuted, Lucas spoke to Entertainment Tonight, sharing details about why he decided to rework the film:

“There were a lot of things in [A New Hope] I just wasn’t happy with and when the film came out everyone said, ‘Oh, looks great. You love it.’ I said, ‘Well, you know it’s only about 60 percent of what I wanted it to be.’ Everybody thought I was nuts. This was an opportunity for me to really fix the film up and make it be what I wanted it to be. And get it to be at least 80 percent of what I’d hope it would be. And get rid of these little thorns that were stuck in there.”

“My original motivation in going back into the film and working on it is [that] films, unlike books or symphonies, are never finished. They are abandoned or yanked away from you. And at some point somebody says, ‘That’s enough. We’re putting it in theaters.’ And you say, ‘But it’s not done!’ ‘Ah, you’ll be on this for a hundred years if we let you keep going at it.’”

In this well-known interview, Lucas went on to share that he did approximately 150 new shots for the special edition of A New Hope and that, ultimately, “It was a very enjoyable experience. I feel very much better about the movie and I think what I’m leaving behind [is] much more what I had in mind.”

What do you think about George Lucas redoing A New Hope to make it more to his liking?