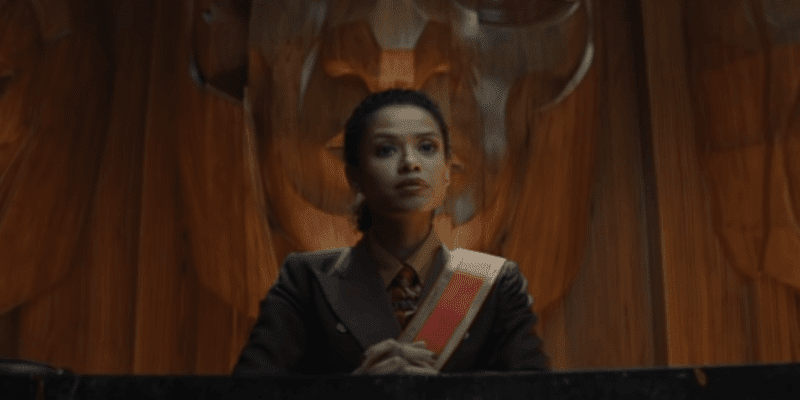 Gugu Mbatha-Raw, Loki‘s fan-favorite TVA Agent Renslayer, has shared with Good Morning America what she can about Loki Season 2.

Loki was the third installment of MCU shows in Phase Four after the release of Elizabeth Olsen and Paul Bettany’s WandaVision, Anthony Mackie and Sebastian Stan’s Falcon and the Winter Soldier. The six episode series focused on Tom Hiddleston’s Loki learning more about the Time Variance Authority (TVA) by figuring out the secrets of the orgainization with Agent Mobius (Owen Wilson) leading the God of Mischief through a case to find a variant of himself called Sylvie (Sophie di Martino) that is trying to take down the TVA.

In the final episode of Season 1, He Who Remains/Kang the Conqueror (Jonathan Majors) makes a triumphant debut into the MCU with the Multiverse opening and the possibility to have Kang’s variants wreak havoc.

The character will reportedly next appear in Ant Man and the Wasp: Quatumania which is set to release in theaters in May 2023.  It’s great that we are getting a second season to explore the God of Mischief’s story even though Kevin Feige recently expressed uncertainty about when exactly the show will hit Disney+.

In a recent interview with GMA, Gugu Mbatha-Raw was asked about Loki Season 2 and if she is returning to play her character, Renslayer. The Loki actress was very hesitant to say anything but she did confirm that she was indeed returning by saying:

“I know there is a season two… I know that I’m in it…and that’s about all I can say!”

Knowing how the Marvel Cinematic Universe operates in secrecy, it makes sense that Mbatha-Raw would possibly not know more or just can’t say much on the subject. Since the multiverse has been unleashed onto the MCU, Mbatha-Raw’s Renslayer may be another variant of the Renslayer we saw in Loki.

In the comics, Renslayer is known to one of Kang the Conqueror’s lovers so it wouldn’t be a surprise if the Kang variant that Loki will encounter in Season 2 has Renslayer as his queen rather than as a judge and agent in the TVA. Another thing to point out is that the comics have it where Renslayer forced Kang to win her affection so it will be interesting to see the dynamic between the two characters. What we can know for certain, is that Gugu Mbatha-Raw will most likely return as one of the antagonists for the story.

It will be interesting to see what Sylvie’s character does in Season 2 as she is the one who kills Kang the Conqueror and causes the sacred timeline to be dismantled. Doctor Strange in the Multiverse of Madness is rumored to have Loki, Mobius and Sylvie reprise their roles, alongside other rumored characters to appear such as Ben Affleck as Daredevil, Fantastic Four, X-Men, Spider-Man and Hugh Jackman’s Wolverine. but it is hard to say if they will be the characters we know and love from the show or if they will just be variants that Benedict Cumberbatch’s Doctor Strange encounters. It will be interesting if Kang the Conqueror gets another tease in Multiverse of Madness, but we will have to wait until May 6 to see.

Are you excited to watch Loki Season 2 when it comes out? Let us know in the comments below!

If you want to stay up to date on the MCU you can stream Chloe Zhao’s Eternals, Scarlett Johansson’s Black Widow and the five series in Marvel’s Phase Four so far — Elizabeth Olsen and Paul Bettany’s WandaVision, Anthony Mackie and Sebastian Stan’s The Falcon and the Winter Soldier, Tom Hiddleston’s Loki, Marvel’s What If…?, and Jeremy Renner’s Hawkeye— on Disney+ anytime.