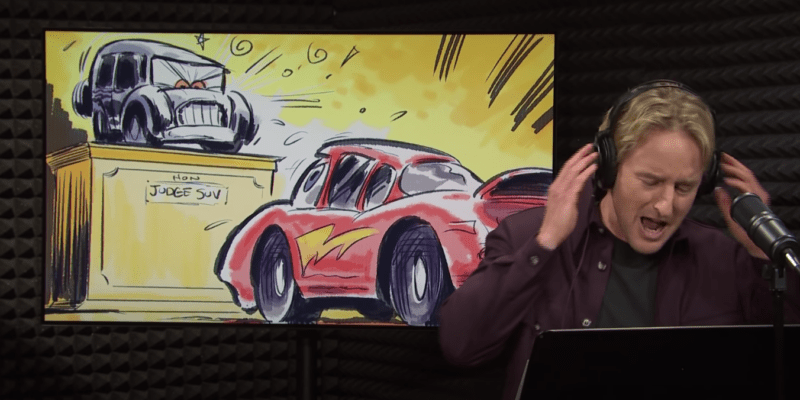 Owen Wilson was recently the host of Saturday Night Live, and during one of his skits, the actor brought back a character many of us Disney fans love, but not in a way we would remember him.

Owen Wilson has had his hand in the Disney pot for quite some time. He recently joined the MCU in the Disney+ series Loki as Mobius, he will star in the new Haunted Mansion film,  but most notably, Wilson is known for bringing Lightning McQueen to life in the Cars franchise. After three films, an entire land at Disney California Adventure, and a whole attraction at Disney’s Hollywood Studios, the saying “Ka Chow” is well known by fans across the globe.

In a recent SNL skit, Wilson pretended to walk through the door of Pixar Studios in California, where he was recording Cars 4: The Spinout. Before any Disney fans get too exciting, let us just preface that this was solely a skit and not accurate information — and as we were able to find out what the film was about, we know why. Please be advised that some words and topics exchanged by Wilson below are of an adult nature.

Wilson begins by saying, “Radiator Springs! Here I come!” which sounds entirely normal for the character. Then, things take a turn; Wilson’s following line is, “Back off, jack, I wasn’t looking at your wife!” We can see that Wilson is a little confused by the line as it is not something McQueen would typically say, but he moves on.

Once Wilson has to read the line, “Calm down, I didn’t touch your daughter, she was coming on to me!” he stops the recording and asks what the film is even about. We then find out McQueen is in court and was inappropriately hitting on other female cars as well as minors (cars who stated they were in high school).

Visibly shocked, Wilson is then joined by Larry the Cable Guy, who is the voice of Mater. Larry says that McQueen called him the R-word, to which Wilson stops the recording and says he cannot continue. Once production shows him how much money he will make off of the recording, however, he agrees to do it with a smile on his face.

Interestingly enough, I think this skit could be playing on the recent lawsuit between Scarlett Johansson. Once Scarlett’s pay for Black Widow was released, many were shocked at the amount, much like Wilson was. We also know that Johansson and Disney have now settled the suit and the once tarnished relationship is now butterflies and rainbows, with Disney looking forward to collaborating with Johansson on upcoming projects and Scarlett reciprocating the excitement.

This comes weeks after the two were bad-mouthing each other publically. Of course, the skit may not be related to anything regarding the lawsuit, but it does have a similar tone that money can solve problems for Disney, which is clearly what the skit was intending to portray in a comical light.

If you want to watch the full skit, you can below. Again, be wary that it has an adult nature to it.

What do you think of Wilson’s new portrayal of Lightning McQueen?