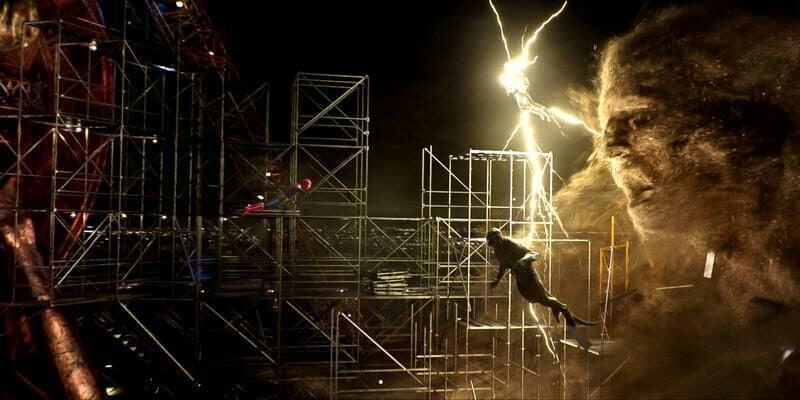 Even though Spider-Man: No Way Home hit theaters several weeks ago, on December 17, 2021, Marvel fans are still clamoring for as many details as they can get about the making of the blockbuster movie, which blew the Marvel Multiverse wide open with the introduction of numerous “Spider-Verse” villains and former Spider-Men Andrew Garfield and Tobey Maguire.

Recently, No Way Home concept artist Maciej Kuciara gave fans something to talk about by leaking artwork that showed crazy cut scenes from the final installment in the Marvel Cinematic Universe’s Spider-Man trilogy.

Although the original post has since been removed — perhaps at the behest of Sony Pictures and Kevin Feige’s Marvel Studios — the art wasn’t taken down before social media users grabbed screenshots that are now making the rounds online.

The image [above] shows Peter Parker, MJ, and and Ned Leeds seemingly standing in the middle of a bumper car attraction at a carnival or boardwalk. It appears that the scene could have been a major Multiversal moment, as Flash Thompson (Tony Revolori) and Betty Brant (Angourie Rice) are also present, standing in a circle around Marvel Comics fan-favorite America Chavez.

The scene was presumably cut due to the fact that the COVID-19 pandemic altered Marvel’s release schedule, meaning most MCU fans wouldn’t have been familiar with the character. Chavez — part of Marvel’s Young Avengers — is slated to appear in Doctor Strange In the Multiverse of Madness (2022), which was originally slated to come out before Spider-Man: No Way Home.

Now, however, the highly-anticipated Doctor Strange 2 isn’t set to come out until May 6, 2022.

As one article about the leaked concept art noted, it is interesting that “instead of Xochitl Gomez [who will play Chavez in Multiverse of Madness] in the role, it seems to be actress Isabela Merced.”

Merced (Dora and the Lost City of Gold, Instant Family) was linked to the part of America Chavez in 2020, but was ultimately not cast in the MCU — this newly revealed artwork, however, shows that the rumors may not have been off base had it not been for the pandemic-related production issues that plagued nearly every television series and film.

Marek Okon, another freelance concept artist who does work for Marvel Studios and Sony Pictures, shared additional No Way Home concept art featuring Chavez in the movie’s final battle, which took place at the Statue of Liberty:

One of the ideas for #SpiderMan #NoWayHome final battle was to slowly burn and destroy the scaffolding so as the fight goes on the Statue of Liberty underneath gets revealed.

This is one of the concepts I did for how it would look. More to come soon ;]

One of the ideas for #SpiderMan #NoWayHome final battle was to slowly burn and destroy the scaffolding so as the fight goes on the Statue of Liberty underneath gets revealed.
This is one of the concepts I did for how it would look. More to come soon ;]#SpidermanNoWayHome pic.twitter.com/oP33c7VTyJ

Although Chavez’s scenes were ultimately not included in Spider-Man: No Way Home, fans can look forward to seeing the popular comic book character make her MCU debut this May.

Would you have liked to see America Chavez in No Way Home?