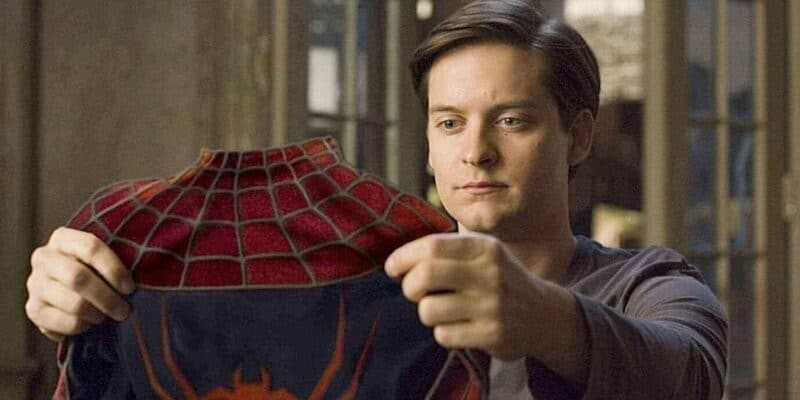 After months (and months, and more months) of speculation, Marvel fans were ecstatic when Andrew Garfield and Tobey Maguire actually did show up in the Marvel Cinematic Universe blockbuster, Spider-Man: No Way Home (2021), blowing the Marvel Multiverse wide open in a way it never has been before on film.

Seeing the trio of “Spider-Men” from different generations together for the first time was both nostalgic and forward-looking for Marvel fans, many of whom are now calling for Maguire’s version of Peter Parker/Spider-Man to return for one more film, directed by Sam Raimi.

The Doctor Strange In the Multiverse of Madness (2022) director oversaw Maguire’s Sony Pictures Spider-Man trilogy between 2002 and 2007.

The same social media user posted a graphic that beseeches Sony executives to create a film similar to Hugh Jackman’s final outing as Logan/Wolverine in the X-Men saga:

Make a Logan-style Spider-Man movie with Maguire. Don’t tie in with any cinematic universe what-so-ever [sic: whatsoever]. Just do a rough, beautiful, emotional tale about an older Spidey. Have Sam Raimi direct. Give him full control. Watch the box office explode.

The #MakeRaimiSpiderMan4 hashtag has exploded, with numerous fan accounts like Tobey Maguire and Kirsten Dunst Web sharing their thoughts about a fourth movie:

I wanted to be in that movie so badly. I loved it, and I wish we could have made a fourth.

💬 I wanted to be in that movie so badly. I loved it, and I wish we could have made a fourth.#MakeRaimiSpiderMan4 pic.twitter.com/a1paaKn6uL

At this time, there has been no official confirmation of any future Spider-Man projects. However, producer Amy Pascal has teased a second Tom Holland trilogy collaboration between Sony Pictures and Kevin Feige’s Marvel Studios.

Fans online, however, are not deterred by the lack of confirmation and are continuing their quest to make #MakeSamRaimiSpiderMan4 a reality by trending on social.

Are you hoping for a fourth Tobey Maguire Spider-Man installment?