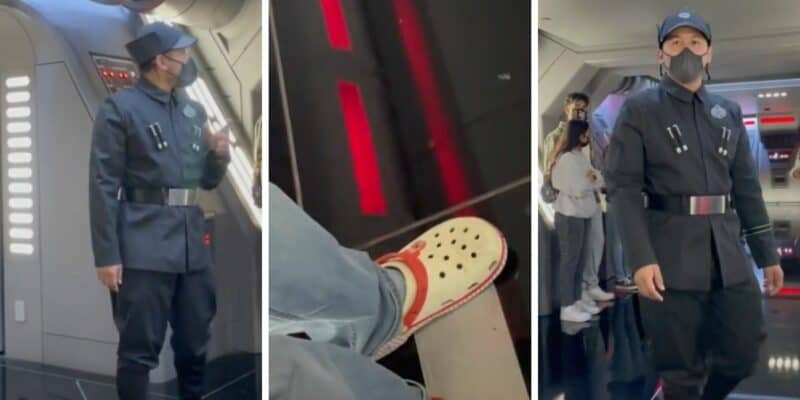 When visiting the Disney Parks, the Cast Members are there to help create magical and memorable encounters with Guests. Typically, Cast Members are friendly and always have a smile on their faces ready to help Guests however it is needed. Though, there are certain areas of the theme parks that allow for Disney Cast Members to actually be rude to Guests.

We are referring to rides such as Haunted Mansion and Tower of Terror as acting is part of the Disney Cast Member role, allowing for Guests to be fully immersed into the attraction and its story. Another ride that Cast Members are allowed to be rude to Guests is on the Star Wars–themed ride, Rise of the Resistance, which located at both Walt Disney World and Disneyland.

During one encounter at the Disneyland version, the Resistance Cast Member completely roasted one of the Guests for his shoe choice — Crocs.

@cierra_cisneros shared the video to TikTok, which you can view here:

Within the video, you can hear the Rise of the Resistance Cast Member say “Sir, are you are aware that there are holes in your shoes? Is this standard issue for the Resistance? Clogs? Because if it is, you don’t even have them in sport mode.”

This roast is, of course, part of the role that the Cast Member is playing, which creates a special and memorable moment for the Guest.

Do you have a memorable moment with a Cast Member at Rise of the Resistance? Or any other Disney Parks ride? Let us know in the comments below.

If you want to visit Disneyland or Walt Disney World on your next vacation, let the expert team at Academy Travel help you plan your next magical vacation. You won’t want to miss everything the Disneyland Paris — Disneyland oor Disney California Adventure — or the Disney World Parks — Magic Kingdom, EPCOT, Disney’s Animal Kingdom, and Disney’s Hollywood Studios — and the Disney Springs shopping and dining district has to offer!