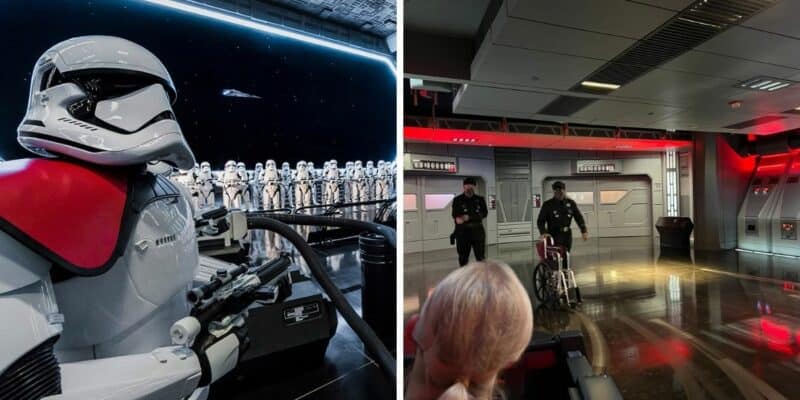 The Force is strong with Disney’s popular new attraction Star Wars: Rise of the Resistance.

Both Disneyland and Walt Disney World Guests look forward in their masses to joining the Resistance in an epic battle against the First Order, in the high-tech, immersive experience like Disney fans had never seen before.

Unfortunately, the incredible technology that makes the Star Wars attraction so unique is often reported to break down, and some Guests at Walt Disney World experienced a very different story on Rise of the Resistance this week.

Based at Star Wars: Galaxy’s Edge, Star Wars: Rise of the Resistance quickly became the hottest (virtual) ticket in town when it debuted in 2019. Guests wishing to experience the attraction need to join the virtual queue by getting a boarding pass via the My Disney Experience App.

Rise of the Resistance at Disney’s Hollywood Studios stopped the use of the virtual queue system back in September, and instead now allows Guests to wait in a standby queue to ride the attraction. Walt Disney World Guests can purchase Individual Lightning Lane to skip the standby queue for an extra $15 per person.

Guests often discuss on social media the continual breakdowns of the popular ride, especially with Disney CEO Bob Chapek’s introduction of the new Disney Genie digital service. After paying $15 to ride the attraction, Guests express disappointment when certain features do not work.

Yesterday, Twitter user Will Henderson (@ParkResearcher) experienced this disappointment after paying $15 for Lightning Lane access. The Disney Guest posted a photo after his ride vehicle broke down on Star Wars: Rise of the Resistance at Disney’s Hollywood Studios:

First Order members can be seen in the revealing photo bringing a wheelchair to the ride vehicle for Guest assistance, while the lights have come on.

When asked if Cast Members stay in character, Will replied that these belittling First Order members told the Guests “Put your phones away and no pictures backstage.” and continued “So basically yea…”.

He then revealed that the Cast Members “Walked us through backstage. Never knew that this room was right next to the offloading exit area.”. What a treat to be able to see the backstage area of one of the most popular rides at Walt Disney World!

Henderson stated that the new Lightning Lane offering from Disney has caused “frustrations”, explaining the costly outcome of the attraction evacuation with no refund:

This was in addition to paying $60 (four party members) last night for RISE and being evacuated. They only offered a new LL to everyone for the hour left in the park hours. $60 gone if I had to leave or had a dinner reservation.

This was in addition to paying $60 (four party members) last night for RISE and being evacuated. They only offered a new LL to everyone for the hour left in the park hours. $60 gone if I had to leave or had a dinner reservation.

Another Twitter user, Carson Martinez (@CarsonMart27), had a tongue in cheek reply to the Rise of the Resistance breakdown:

It’s good to know that even The First Order offers wheelchair assistance.

It’s good to know that even The First Order offers wheelchair assistance.

The disappointment of not being able to experience the full ride in its entirety after paying for Lightning Lane is understandable, but not many Disney Guests get a glimpse into the backstage areas of the Star Wars attraction.

The photo shows a very different detention cell experience, with Kylo Ren being replaced by a blank test screen. This would certainly take away from the determination of Guests to escape the detention cell and reach their travel pods.

The official description of the Disney’s Hollywood Studios attraction reads:

Have you experienced a break-down at Walt Disney World recently? What fun backstage area did you get to see?