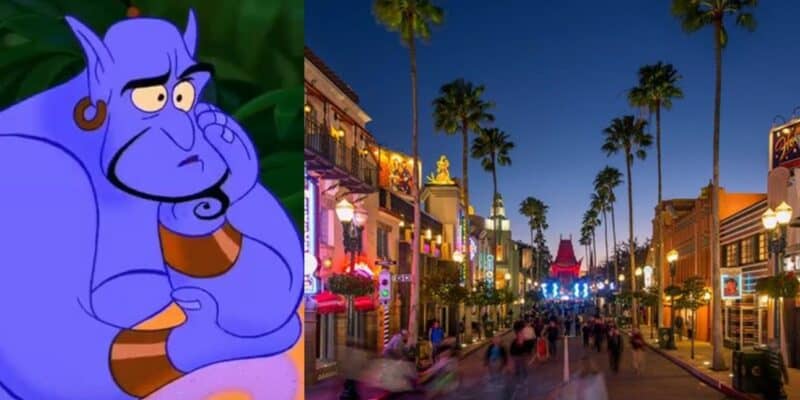 From the new “Beacons of Magic” and Disney Enchantment spectaculars as part of Walt Disney World’s 50th anniversary celebration, to the festive decorations that line the Parks for the holiday season, Guests have plenty of magic to see.

With the launch of the new digital service Disney Genie, however, Disney Guests have been debating whether this new tool stops Guests from being fully engaged in the Park experience due to cellphone reliance.

The new service launched in Disneyland Resort in Anaheim, California back on December 8 to mixed reviews and malfunctions in its first week.

Featuring a whole host of intuitive technology to help Guests plan their day, the digital tool has been suffering issues following its launch. From sold-out attractions like Star Wars: Rise of the Resistance, to app failures on their phones, Guests have been quick to share their opinions on Disney Genie on social media.

This morning, the controversy continued as Disney Genie at Walt Disney World has been having trouble with individual Lightning Lane selections. Guests were quick to voice concern and anger during their failed attempts to secure the coveted Lightning Lane attraction bookings.

At 7 a.m. today, Individual Lightning Lane options did not populate in the My Disney Experience app, with Inside the Magic holding reservations for Disney’s Animal Kingdom and not being able to book a Lightning Lane for Avatar: Flight of Passage.

After many refreshes of the app and still getting the error message, at 8:15 a.m. individual Lightning Lane selections became available to click and book. Some individual selections like Expedition Everest., however, were shown to be sold out by 9 a.m. when they actually were still available.

From the high cost compared to the previously free FastPass service, to the frequently restrictive choices and complicated system, Disney’s new digital service is causing much division and strong opinion among Disney Guests.

The option to purchase Individual Lightning Lane attractions at @WaltDisneyWorld  appears to be broken today. There’s no button to click for purchase like normal. genie+ button is still available.

The option to purchase Individual Lightning Lane attractions at @WaltDisneyWorld appears to be broken today. There's no button to click for purchase like normal. genie+ button is still available. pic.twitter.com/zbUZATyw2q

In Hollywood Studios right now trying to use it & it SUCKS ! System down & can’t book any lightning lane rides .

@WaltDisneyWorld  should be ashamed charging so much money for such a poor product. Basically if your not staying on resort your of no concern to them too #ripoff #scam 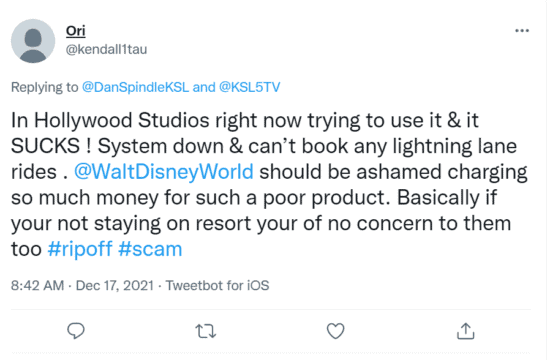 Will Henderson (@ParkResearcher) also tried for Avatar: Flight of Passage at Disney’s Animal Kingdom and failed to secure a Lightning Lane due to the errors this morning. The Twitter user explains that he was on the app at 7 a.m. and waited until 8:20 a.m. before the Lightning Lane options populated:

No success. Kept getting an error message. Chatted with the app CM, waited for 1 hour and 45 minutes for a response. Long story short. I don’t have a LL for FOP today due to a tech glitch on Disney’s end this morning.

No success. Kept getting an error message. Chatted with the app CM, waited for 1 hour and 45 minutes for a response. Long story short. I don’t have a LL for FOP today due to a tech glitch on Disney’s end this morning.

He goes on to write that “This was in addition to paying $60 (four party members) last night for RISE [of the Resistance] and being evacuated. They only offered a new LL to everyone for the hour left in the Park hours. $60 gone if I had to leave or had a dinner reservation.”

Guests have already been discussing on social media the continual breakdowns of the popular ride, especially in Walt Disney World where Guests have been able to purchase Lightning Lane to skip the standby queue since October. After paying $15 to ride the attraction, Guests express disappointment when certain features do not work.

Just this week, Disney Guest darren, a dog like (@tai_nugget) shared how his day at Disneyland was left in shambles due to purely following the tips of Disney Genie.

The digital service recommended the Guest head Pinocchio’s Daring Journey at rope drop, which ironically wasn’t even open yet. The Guest explained: “Genie has guided me to a ride that did not open with the Park. I even refreshed Genie, and it is still telling me to go there. My first 15 minutes in the Park and Genie has gotten me on absolutely nothing”.

The Guest also highlighted how often Genie tries to upsell Disney Guests for expensive products such as a $200.00 Lightsaber from Savi’s Workshop or a $100.00 custom Astromech Droid at the Droid Depot in Star Wars: Galaxy’s Edge.

Were you trying to get a Lightning Lane booking this morning? What was your experience?