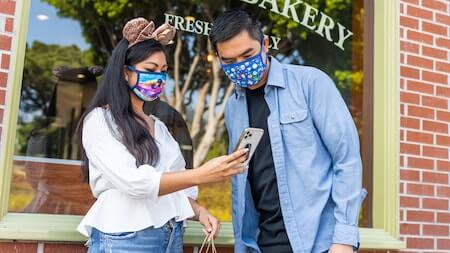 Disney Parks are full of exciting entertainment, character sightings, and amazing themed lands, providing so much for Disney Guests to look at and enjoy.

From the new “Beacons of Magic” in Magic Kingdom, EPCOT, Disney’s Hollywood Studios, and Disney’s Animal Kingdom as part of Walt Disney World’s 50th anniversary celebration, to the festive decorations that line the Parks for the holiday season, Guests have plenty of magic to see.

With the launch of the new digital service Disney Genie, however, Disney Guests are debating whether this new tool stops Guests from being fully engaged in the Park experience.

Featuring a whole host of intuitive technology to help Guests plan their day, the digital tool has been suffering issues following its launch. From sold-out attractions like Rise of the Resistance, to app failures on their phones, Guests have been quick to share their opinions on Disney Genie on social media.

Now, the big question involves whether Disney Genie distracts Guests from spending time together in the Parks and being fully engaged.

With all the high-tech at Walt Disney World and Disneyland Resort, including MagicMobile, My Disney Experience, maps, mobile orders, wait times, virtual queues and now Disney Genie, Guests have a lot of screen time while in the Parks. Even just keeping your cellphone charged can be an issue with a long day in a theme park.

We recently reported how Guests will soon see an improvement in the Wi-Fi service at Walt Disney World in the near future as Disney has filed several permits, all relating to the Disney World complimentary Wi-Fi service.

These upgrades will certainly encourage more Guests to use their cellphone. One user on Twitter, Christopher Ripley, noted the change in the Disney experience, writing:

One of the subplots for the Modern Family episode “Disneyland” was Manny learning to have fun on vacation and to stop using his cellphone. Skip forward 10 years and Disney now actively wants you staring at your phone and not having fun at all times

One of the subplots for the Modern Family episode “Disneyland” was Manny learning to have fun on vacation and to stop using his cellphone. Skip forward 10 years and Disney now actively wants you staring at your phone and not having fun at all times pic.twitter.com/i7J1EvGrCv

Many Disney fans joined the debate on whether Disney was now encouraging more time “staring at your phone”. JasonY replied:

To me, this is the worst part of it all. Before, you could book 3 to start the day and didn’t have to be buried in your phone. Now, you’re at a huge disadvantage if you don’t have a phone and aren’t buried in it all day. Not what Walt wanted.

While Felicia added a comment regarding family cellphone rules:

It was bad enough needing to be stuck to it for mobile orders this past trip. Now for booking fast passes and to remember return times. There goes my no cell phone rule for family vacations out the door when at Disney.
– Felicia (@craftymom35) – October 26, 2021

Other Disney fans, however, accepted the technological advancements in the Disney Park experience, with Kathy Corday writing:

Change is always a change, whether one chooses to welcome it or not.
– Kathy Corday (@kathycordayusa), October 26, 2021

And another noted how cellphone use and mobile technology can actually improve your day in the Parks:

I just came back after using my phone to do things in the park, and I had a blast with my family. Got on rise and mobile ordered food. In no way was I not fully engaged or distracted by my phone. It’s almost as if technology can be used to enhance the experience

We will have to see what the long-term response is from Disney Guests about Disney Genie and how it affects the Disney Park experience. Keep posted for more updates about the upcoming launch over at Disneyland Resort in California.

What do you think about cellphone usage in the Parks? Let us know in the comments.