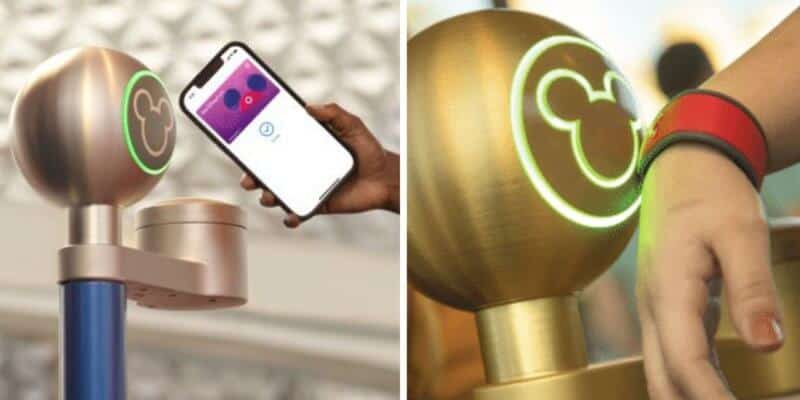 Disney’s MagicMobile service, which will be coming to the Walt Disney World Resort in phases starting later this year, hopefully in time for the 50th anniversary, will allow Guests to utilize their iPhone, Apple Watch or another smart device to access features such as theme park entry.

The added bonus is Disney confirmed Guests can choose between using their MagicBand or their mobile device, without any disconnect between the two.

With complimentary MagicBands being a thing of the past for Disney World Resort Guests, not all visitors may want to spend money on a new band, after paying the price of a Disney vacation. But with that being said, MagicBands are highly convenient as they give Guests access to their room, theme park tickets, and even a credit card! You can literally leave your wallet at home or in the safe within your Resort room and head for a magical day at the Disney parks without worry, so long as you have that colorful band on your wrist.

That being said, considering everything is on mobile devices nowadays, Disney has created the new service, MagicMobile, which sounds like it will act as a MagicBand, but on your phone!

Most features of Disney MagicMobile will be accessible simply by holding up your mobile device (such as an iPhone or Android phone) to an access point, similar to the way a MagicBand or Apple Pay works. And as we mentioned earlier, once the service launches, Guests will be able to choose either their MagicBand or MagicMobile, depending on their preferences, to access things such as theme park tickets. Both can be used simultaneously depending on what is most convenient for you during your magical vacation!

To read more on Disney’s official statement about the service, click here.

And ever since Disney announced the new service, Guests weren’t holding back and immediately shared their thoughts on MagicMobile. So do Inside the Magic readers think MagicMobile is a great idea, or, a step in the wrong direction? Here’s what we found.

It seems that a lot of Guests weren’t excited by the news, as it felt that MagicMobile was in a sense, replacing the MagicBand.

And if Julie Z. had to pick, it seems the convenience of the MagicBand wins for her!

“I would rather use the Magic band. It is readily accessible on my arm. Don’t need to dig it out of my bag or pocket. The Magic band is also waterproof and great for the water park. Also Magic bands don’t need to be recharged.”

Jen B. also prefers the original MagicBand, as she says she likes to to stay off her phone and enjoy the parks when on vacation:

“I hate how all these parks are all about using your phone. Now adays that’s all people do..well when I’m on holidays with my family, you have no idea how nice it is to not have a cell phone in your hands at all times. I think people should take it all in instead of their faces being stuck in an electronic. I dont support more uses of phones on holidays. That’s my opinion”

Logan G. shared that he still wants more opportunities to use the MagicBand, noting:

“Dang it feels like the bands were introduced only like 3 years ago. I’ve only had the pleasure of using them once. And the first time they were still in a testing phase.”

It seems as though Guests’ main complaint is that they want to keep using their MagicBands when at the parks. But as we mentioned earlier — you still can! MagicMobile works in tandem with the MagicBands, not against it. It is as if you have the opportunity to carry two MagicBands with you at all times and you can use whichever is more convenient for you.

With that being said, Inside the Magic fan, Tony E. seems to be okay with the option of having both:

“I’m ok with this as long as Magic Bands are still an option.”

Denny S. brought up an interesting point, noting that not all Guests like to wear a plastic device on their wrist. Whether it be allergies or a sweat collecting issue (wearing a MagicBand during Orlando summers and you will know what I mean), sometimes keeping your wrists free is preferable.

“Cool I can’t use magic bands. Skin is allergic to that stuff”

Jordan N. was ready for the new update saying:

Taylor O. was glad to know that there was an alternative now that MagicBands are no longer complimentary.

“finally have an answer to what will replace macigbands”

David R. touched on what I, personally, think is the biggest pro. One ITM reader noted that they like collecting MagicBands in which David responded:

“true….. BUT if for some reason you forget the magic band it will be way easier to get in!”

This is key! Guests can still use their MagicBand, but by having a backup on your phone, which you would most likely bring with you to the parks anyway, it is a nice option in case something goes wrong. I’ve seen Guests leave their MagicBands in their rooms and discover that they forgot it just as the Disney bus pulls up to Magic Kingdom in a frenzy. Now, that will never be a stressful situation for any Guest again since you can use your mobile device instead!

What are your thoughts on MagicMobile? Do you have a preference between the new service and MagicBands?

If you want to plan a Disney vacation, you need to plan today! Magic Kingdom, EPCOT, Disney’s Hollywood Studios, and Disney’s Animal Kingdom are all planning out their big celebrations for the big 50th anniversary celebration, and you can be there too to share the magic with Mickey Mouse, Minnie Mouse, and all of the other Disney fans! Click here to get started today.