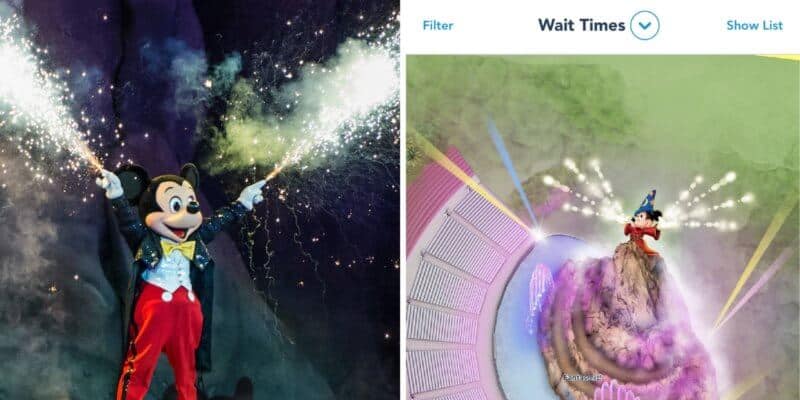 Although 2021 is a fresh year, many of the offerings that were taken away in 2020 at Disney World due to the pandemic are still omitted.

One of the major changes that Guests have had to get used to within the parks is the lack of entertainment, especially when it comes to nighttime spectaculars. Fantasmic! at Disney’s Hollywood Studios is a fan-favorite show that Guests have been missing since the park closure. However, now thanks to a new update on the My Disney Experience app, we might just a glimmer of hope in terms of seeing some life injected into the Hollywood Hills Amphitheater.

The My Disney Experience app has recently added a new Sorcerer Mickey above the Hollywood Hills Amphitheater where Fantasmic! plays and it has us excited for when the show is able to make its return!

Although this does not mean that Fantasmic! is returning anytime soon, it is a step in the right direction. After Cinderella Castle received its new paint job, we saw that reflected on the My Disney Experience app in the Magic Kingdom section of the Disney World map — which has this reporter hopeful that the update could indicate that Fantasmic! will return sooner rather than later in 2021.

Currently, Disney’s Hollywood Studios is playing the Fantasmic! preshow music from the Hollywood Hills Amphitheater speakers while Guests walk by, however, the lagoon has been drained for quite some time. It has been a while since we saw an ariel shot of the stage, so perhaps water will return soon, leaving the theater ready for a performance once Fantasmic! can make its return and bring Guests back into Mickey’s dreams.

At this time, Disney World has not announced when Fantasmic! would be returning to the theme park and this is just pure speculation. Inside the Magic will continue to update you as we get information.

Slowly, it seems Disney is working to bring back its nighttime offerings. The Electrical Water Pagent is back making its way down Seven Seas Lagoon once again, and during the holiday season, Magic Kingdom celebrated with castle projections and light pyrotechnics.

We also know that HarmonioUS is set to continue testing with its water barges now on World Showcase Lagoon, which means that Disney could be preparing to bring back additional evening spectaculars to the Disney World parks this year! However, this is pure speculation on when Disney will bring back nighttime spectaculars, and Inside the Magic will keep you posted as we get information.

If you want to visit Disney World in 2021 and be here for the 50th Anniversary Celebration, as well as everything else that is heading to the parks this year, why not book a vacation? Click here to get started today!

When do you think Disney is going to being Fantasmic! back? Let us know your thoughts below!

Comments Off on Fantasmic! Gets an Update on the My Disney Experience App