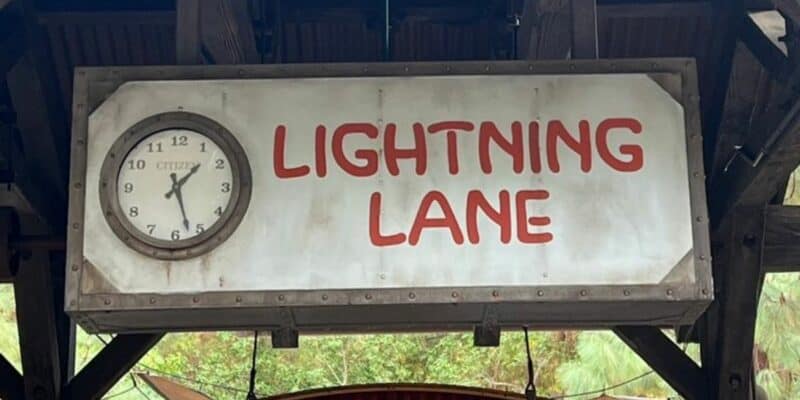 On October 19, Disney’s new planning tool, Disney Genie launched at Walt Disney World Resort. Also launched the same day was Disney Genie+ — a paid-for service that will allow Guests to purchase Lightning Lane access to a number of rides at the Resort throughout the day. Lightning Lane is the new FastPass queue that will get Guests on to a ride faster by allowing them to skip the Standby queue.

While Disney Genie and Genie+ have currently only launched at Walt Disney World, Disney has announced that the same program will be coming to Disneyland Resort in California sometime this fall. Disney has not given an exact date for the Disneyland launch, but the date may be coming up sooner than we think!

Five Fires (@thecalibae) shared images of Lightning Lane signs that have been installed at Grizzly River Run at Disney California Adventure Park on its Twitter account.

Right now, the pictures only show that the sign has been installed at Grizzly River Run, but numerous rides will be included as part of Disney Genie+. You can read the full list of attractions for both Disneyland and Disney California Adventure by clicking here.

Here is more information on the Disney Genie+ system that is coming to Disneyland:

For the price of $15 per day, per ticket at Walt Disney World Resort and $20 per day, per ticket at Disneyland Resort, choose the next available time to arrive at a variety of attractions and experiences using the Lightning Lane entrance. You can make one selection at a time, throughout the day—from classics like Haunted Mansion to thrill rides like Big Thunder Mountain Railroad and newer favorites like Millennium Falcon: Smugglers Run (attractions subject to limited availability). This convenient option is the next evolution of the fan-favorite Disney MaxPass service from Disneyland Resort. Disney Genie+ will also include Disney parks-themed audio experiences and photo features to capture your memories—unlimited Disney PhotoPass downloads from your day if you are visiting Disneyland Resort.

Inside the Magic will let readers know when a launch date for Disney Genie and Genie+ is announced by Disney.

How do you feel about the new Genie+ and Lightning Lane system that is coming to Disneyland? Let us know in the comments!