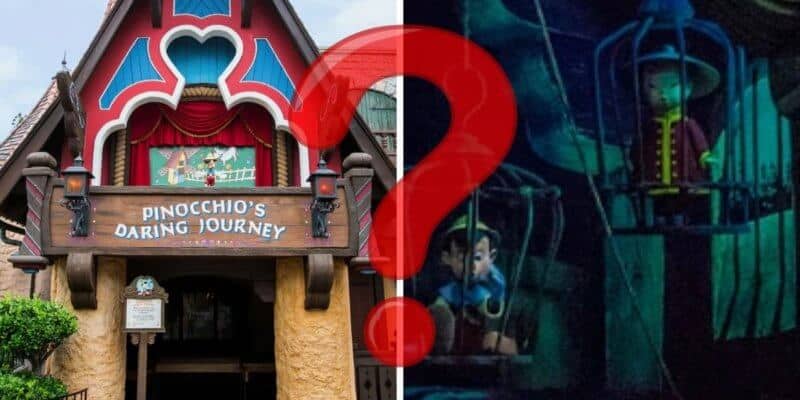 Disney Parks recently announced that Splash Mountain will be re-themed after the beloved Disney animated film, The Princess and the Frog.

But now, some are calling for a re-theme of yet another popular Disneyland attraction — Pinocchio‘s Daring Journey. If you’ve never had the chance to ride this attraction, the official description reads:

Relive the classic adventures of the wooden puppet who dreamed of becoming a real boy.

Hop aboard a woodcarver’s cart at the Stromboli Puppet Theatre, where Pinocchio is singing and dancing in a festive marionette show.

One Inside the Magic reader recently commented on an article calling for a re-theme of the popular Disneyland attraction, writing:

To the Inside the Magic staff. I want to let you know that Pinocchio’s
Daring Journey is my least favorite ride as it makes me feel very
uncomfortable as it’s the most disturbing ride partly due to scary
clowns that some of the people don’t like but also mainly because of
the child slavery and child abuse scenes involving Pinocchio being
caged up and then 2 donkey boys sold into slavery in cages has made me
uncomfortable.

I would like to ask the Disneyland staff to consider replacing
Pinocchio’s Daring Journey Ride with a different Disneyland ride as
it’s not the happiest place to be on which is a ride that’s not family
friendly.

Please Disneyland company, replace Pinocchio’s ride with something
else, like Cinderella or maybe Beauty and the Beast ride, child
slavery in the Pinocchio ride is a very sensitive subject for
families.

I don’t know if you’re aware of this but how about child
slavery that’s featured on Pinocchio’s Daring Journey ride. I have
nightmares with that ride featuring child abuse, scary scenes and
donkey boy slavery being caged up. There’s also scary clowns on that
ride many people get scared of.

This comment from another Inside the Magic reader suggested a re-theme to Aladdin or Wreck-it Ralph, writing:

What about the Child Slavery featured in Pinocchio’s Daring Journey ride.

To the inside the magic staff, when I went on Pinocchio’s Daring Journey Ride, I was shocked and surprised to see a depiction of child slavery and animal cruelty on the Pinocchio ride involving 2 donkey boys in cages.

Will Pinocchio’s Daring Journey Ride be updated to remove the cages from 2 donkey boys? Or will the Pinocchio ride be replaced by the Aladdin ride or Wreck-it-Ralph ride?

Please let me know because I get very sensitive to child slavery images and I don’t want to see child slavery depicted on the Pinocchio ride anymore.

Some have even taken to Twitter recently asking for Disney to replace Pinocchio’s Daring Journey with Princess Tiana, referencing the recent announcement of the re-theme of Splash Mountain with The Princess and the Frog.

Can we put Tiana in Pinocchio’s Daring Journey as well? #1983 pic.twitter.com/v1W2IGBqAA

One Twitter user, R.J. Crowther Jr., points out that the Disneyland attraction focuses on the “dark heart of the story”, the reasoning to why some are calling for a re-theme. However, R.J. later clarified the point, which acknowledges that some may love classic Disney attractions and still recognize that they can have a darker history:

Yes! Note the sad and frightened human eyes of the carousel donkeys. And there's a donkey Lampwick in a cage repeatedly crying "Mama!" The imagineers who built Pinocchio's Daring Journey certainly embraced the dark heart of the story. pic.twitter.com/BekudSM0nZ

I absolutely love Pinocchio's Daring Journey! It's one of my favorite dark rides, based on one of the greatest animated movies. I was merely pointing out that the imagineers perfectly captured the grim imagery of the film & original novel. They also captured the light & hope. ?

Note that R.J. pointed out last month that Pinocchio’s Daring Journey is “one of the greatest dark rides ever!” R.J. is actually on the side of preserving the attraction.

Pinnochio's Daring Journey – one of the greatest dark rides ever! Sharing some photos I took on my trip to Pleasure Island. #Disneyland65 @DisneylandToday #Disneyland
??‍♀️? pic.twitter.com/bf9mS0Nzvu

In case some of you aren’t aware of the Splash Mountain re-theme, below is the official announcement from Disney Parks:

What do you think? Should Disney re-theme Pinocchio’s Daring Journey? Let us know in the comments below.

If you want to visit Disneyland or Walt Disney World on your next family vacation, but aren’t sure where to begin planning, then don’t hesitate to reach out to our friends over at the Authorized Disney Vacation Planners at Academy Travel for a free quote.