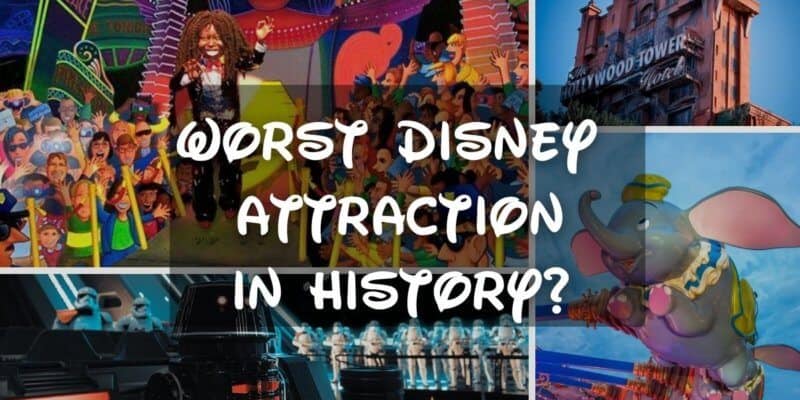 From classics including Haunted Mansion, Pirates of the Caribbean, “it’s a small world,” and Peter Pan’s Flight to thrill rides including Twilight Zone Tower of Terror, Rock ‘n’ Rollercoaster, Space Mountain, and Rise of the Resistance, both Walt Disney World and Disneyland are filled with fun and unique attractions that Guests can’t find anywhere else.

However, there is one attraction that will go down as the worst attraction in Disney history.

The Worst Disney Attraction Is..

Former Disney CEO, Michael Eisner, absolutely loved the idea of the Disneyland Resort attraction Superstar Limo. The attraction was designed to fit right in with the Hollywood Pictures Backlot area of Disney California Adventure, which if you didn’t already know, was very appealing to Eisner, having spent his entire career in Hollywood. Therefore, when Eisner initially saw the plans, he immediately was on board and fell in love.

However, on the morning of August 31, 1997, things drastically changed. The unfortunate news of Princess Diana passing in a car accident had emerged. Princess Diana’s tragic death was due to the alleged presence of paparazzi pursuing the vehicle.

“You end up with Princess Diana dying right midway while the project is being installed, and suddenly paparazzi are, like, ‘That’s a really bad theme,'” Walt Disney Imagineering Chief Creative Executive Bruce Vaughn said in the Disney+ docuseries The Imagineering Story. “… You’re almost done, what are you gonna do? So now it turns into, ‘you’re gonna be a star.'”

Trying To Save Superstar Limo On A Low Budget

The original ride plot that Eisner originally approved, according to SF Gate, was this:

You, the titular superstar, were being picked up by your limo at Los Angeles International Airport. Eisner himself came on a video screen and warned you that your huge movie contract with Disney wasn’t signed yet. In order to seal the deal, you had to zip through L.A. traffic, avoiding the paparazzi, and arrive at Grauman’s Chinese Theatre to meet Eisner.

What followed was a high-speed chase through the city’s most iconic landmarks. Upon arrival, Eisner would inform you that, sadly, you’d been caught by unscrupulous cameras and the contract was void. Guests would then exit up the Chinese Theatre red carpet and into a gift shop, where photos of themselves snapped on the ride, superimposed on tabloids, were available for sale.

However, with the sudden tragic death of Princess Diana, this suddenly seemed “tasteless.” The team had to do something in order to save this attraction. Though this was not easy — Due to Eisner’s theme park expansions all around the world, funds within the company were running short for Disney California Adventure park.

The Reimagining of Superstar Limo

The first thing the Disney team decided to get rid of was the “chase” element, simply due to the fact that if they moved forward with it, it would look inconsiderate and distasteful after the sudden passing of Princess Diana. So, Superstar Limo now had to become a slow ride, much like the classics Haunted Mansion and Pirates of the Caribbean.

The second thing they did was add celebrities into the attraction, however, due to the low budget they had to stick to celebrities already contracted with Disney. These included Joan Rivers, Cher, Jackie Chan, Regis Philbin, Tim Allen, Cindy Crawford, Drew Carey, and then-couple Melanie Griffith and Antonio Banderas.

However, once again, due to the budget — They had to go with cheap looking figures rather than lifelike animatronics.

The New York Times called it “probably the schlockiest attraction” in the park.

The Longview Daily News in Washington State said, “The space would be better devoted to something more entertaining, such as an Audioanimatronic dentist doing root canals on all Imagineers who came up with the idea for Superstar Limo.” The reviewer gave it one star in their ride-rating system, saying: “Burn this ride to the ground and start over.”

Guests agreed with both The New York Times and The Longview Daily News. It was obvious that the look and feel of Superstar Limo was cheap and nowhere near the Disney standard.

Not even a year after opening, Superstar Limo closed in January 2002.

Have you ever heard of Superstar Limo? What do you think? Let us know in the comments below.