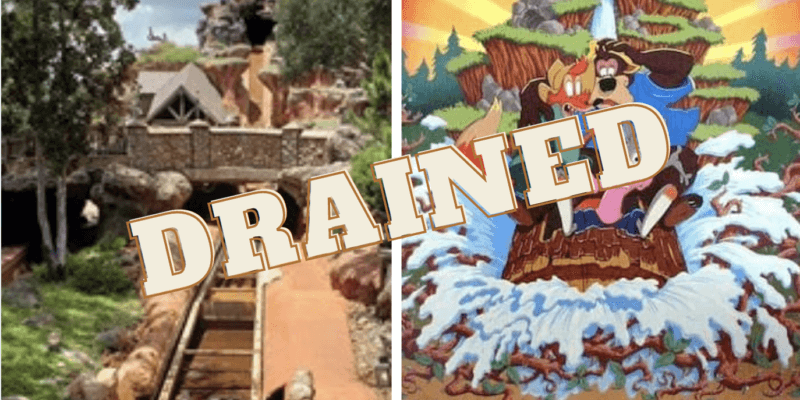 “Let the change begin…splash mountain is currently drained. Could this be the beginning?”

Let the change begin.. splash mountain is currently drained. Could this be the beginning? pic.twitter.com/uHu6vzNg1Y

“The beginning” Bethany’s Tweet refers to is, of course, the planned re-theming of the Disney parks ride at both Disney World and Disneyland. Instead of its existing Song of the South theme, it will be renovated to feature Princess Tiana, Prince Naveen, Louis the alligator, and other Princess and the Frog characters.

It is worth noting that Walt Disney World officials have not announced the reason for Splash Mountain’s draining and closure today. Although scheduled ride closures for maintenance are generally announced to the public and this particular event was not, Splash Mountain has been drained for refurbishment and routine cleaning in the past.

It is worth noting that as of an hour ago, Splash Mountain had not been added to the “Closed For Refurbishment” list on the Walt Disney World Resort website. The only attraction that is currently listed as “Temporarily Unavailable” is the Walt Disney World Railroad on Main Street, U.S.A. We expect Disney to make a formal announcement of a set date when Splash Mountain will actually close.

When Disney announced that Splash Mountain would be re-themed at its theme parks on both coasts, no timeline was announced for either project.

Since former Walt Disney World Resort President and current Disney Parks Chairman Josh D’Amaro indicated that Lead Imagineer Charita Carter, Disney Legend Imagineer Tony Baxter, and others who are involved in the design process have been working for over a year, however, it can be assumed that work on the Princess and the Frog Splash Mountain retheme will begin sooner rather than later.

Since this is a developing story, stay tuned to ITM for additional updates about why Splash Mountain at Disney World has been drained of water today.