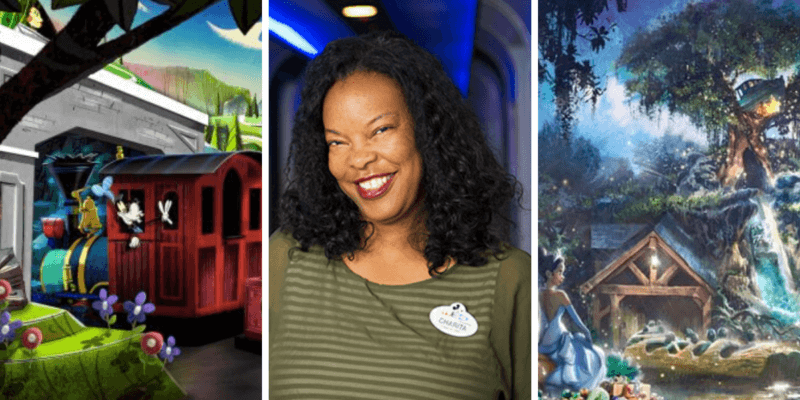 Many Disney fans recognize Charita Carter — who has been with Imagineering for over 20 years — from her work on Mickey and Minnie’s Runaway Railway, which debuted at Disney’s Hollywood Studios earlier this year and will be coming soon to Disneyland. Charita is also the Imagineer leading the charge of the Princess and the Frog attraction planned for Disneyland Resort and Walt Disney World Resort. But her love for Disney runs even deeper and got its start at the Happiest Place on Earth.

In an article on D23, Charita shared her experience as a child saving up money for Disneyland. She and her siblings would do odd jobs around the house in order to save enough money to spend when they got to the Happiest Place on Earth. And when Charita visited Disneyland for the first time at seven years old, her day was simply magical in an unexpected way.

When the family first walked through the ticket gates of The Happiest Place on Earth, her father surprised his wide-eyed kids with an unexpected gift—a crisp $20 bill for each them. Turns out this $20 supplement became a Carter family ritual that took place every four years or so when the family visited the park together—but, as it is for almost every family tradition, the first time is the one you remember most. “I’ll never forget that moment,” she says.

Charita recalls with D23 that her father loved Disneyland just as much as his children did. Years later after Charita began working for the Walt Disney Company, she brought her parents back to the original Magic Kingdom. To keep up with the family tradition, she handed each of her parents a $20 bill, just like her father did for each of his children on that first trip many years prior.

“We sat there and had a good laugh about our family tradition,” Charita laughs. But as she strolled down Main Street, U.S.A. with her parents, she couldn’t help but think of her first visit to Disneyland—when a family tradition began and she first felt the magic of Disney.

It’s this story published by Disney’s D23 that shows Charita’s true love for the parks — and that love for Disney magic shines through in all of her projects. Her ability to combine storytelling with pixie dust, and excitement with magic, is something that shows in every attraction Charita has worked on.

Fans have fallen in love with Mickey and Minnie’s Runaway Railway, a historic attraction as it is the very first ride that features Mickey and Minnie Mouse as the focus. The attraction takes Guests on an adventurous runaway train ride through a “cartoon universe crammed with surprises.” It’s fun, it’s lively, and it’s great for the whole family.

Watch Charita give a first look at Runaway Railway below:

In an interview with Black Girl Nerds, Charita shared some insight into what it was like working on Runaway Railway:

“My favorite part about being on this project, there’s just so many aspects of it, but I have to say, I am working with one of the best teams I’ve got a world-class team, and everybody has a lot of passion and love for the characters and what we’re bringing forth and that has been just my favorite part, getting to work with my fellow Imagineers all with a common vision and everybody has taken ownership of what we’re doing. And we feel really good about what we’ll be delivering to our Guests.”

And most recently, it was announced that Charita would be the leading the project of reimagining Splash Mountain to be themed after The Princess and the Frog, giving Princess Tiana her first attraction.

“Like Princess Tiana, I believe that courage and love are the key ingredients for wonderful adventures,” Charita shared in the announcement. “I am delighted to be a part of bringing this fun-filled experience to our Guests.”

You can watch a video of Charita discussing immersive storytelling at Disney Parks below:

It’s clear that Charita is an excellent storyteller. We can’t wait to see more of her work and ideas come to life in the future at Disney Parks.

Which Imagineer would you like us to feature next in this series? Let us know in the comments!