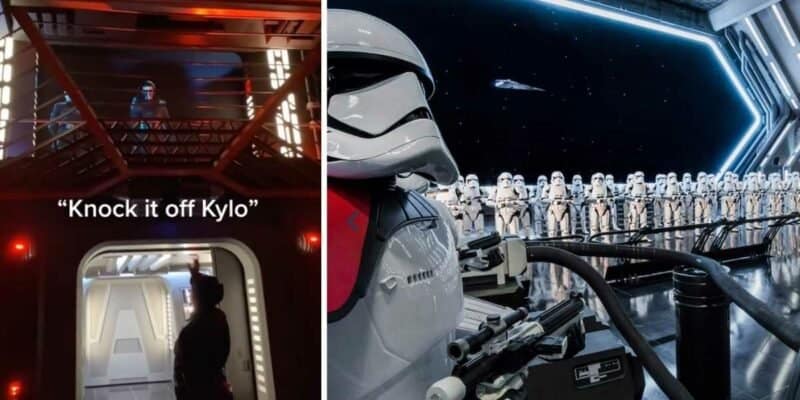 Star Wars: Rise of Resistance is one of Walt Disney World’s most popular attractions. Situated in Disney’s Hollywood Studios, the ride premiered in 2019 and soon became the hottest ticket in town — if the town were the Disney World Resort in Orlando, Florida.

While Magic Kingdom, EPCOT, and Disney’s Animal Kingdom also have huge draws — notably, Pandora’s Flight of Passage at Animal Kingdom — it’s Rise of the Resistance that truly challenges the attraction experience like no other. That being said, even the most popular theme park rides break down and in some cases, hilarious antics ensue.

Star Wars: Rise of Resistance joins Millennium Falcon: Smuggler’s Run in Batuu at Star Wars: Galaxy’s Edge. The attraction can only be ridden by Guest’s joining a virtual queue to secure a Boarding Group at the start of the Park day as well as in the afternoon at 1 p.m.

Virtual queues are becoming quite the norm at Disney Parks — the latest EPCOT attraction, Remy’s Ratatouille Adventure — will also join Star Wars: Rise of the Resistance and WEB SLINGERS: A Spider-Man Adventure as Disney Resort rides requiring this new system. However, last week saw the announcement of Disney Genie, Genie+, and Lightning Lane. The latter two will take over from the currently suspended FastPass+ program at Walt Disney World and MaxPass at Disneyland in California to provide Guests with a new option to pay to ride attractions without using the Standby line.

While the virtual queue will remain in place for Star Wars: Rise of the Resistance, Guests can soon pay to ride the hugely popular in-demand attraction by utilizing the Lightning Lane option on Disney Genie.

Disney Genie is yet to debut and will arrive sometime this fall for the 50th Anniversary celebration of the Walt Disney World Resort.

Back to the present day, and despite the slick operations of a Disney Park, some rides do occasionally fail. Recently, Star Wars: Rise of the Resistance broke down, meaning Guests were evacuated from the attraction but not before Kylo Ren had the last word.

In a TikTok from a Disney World Guest, Leslie (@disneydelis) shared a hilarious moment a Cast Member in Imperial garb entered one of the scenes with Kylo Ren to escort the riders off of Rise of the Resistance. You can watch the video here:

When interrogation doesn’t go to plan

The video shows the Cast Member entering a room with Kylo Ren and Guests and interrupting the ride due to it breaking down. As Kylo Ren continues his speech, the Cast Member hilariously argues with him until he is finished and walks away. The comments of the video added context to the humorous situation.

One commenter noticed the Resistance characters walking in the background saying, “Omg not the actual resistance walking through in the background”, which the original poster responded to, saying, “When they took us back out of the room they said they were resistance prisoners heading to be interrogated too”. Disney Resorts are notorious for keeping their theming and Guest experience to the highest standard so it’s not surprising that someone called out this continuity error of the ride.

Someone else asked what the situation was:

“Wait so what happened??? Did the door not close or smth [something]”

The ride went down as soon as we entered the room. Cast member re-opened the door and then escorted us out after kylo was done yelling at us

Disney Parks are usually good at compensating Guests when attractions break down, malfunction, or need to be evacuated while on their Disney vacation. This Guests doesn’t state if they were allowed to ride again following the issue at the Florida theme park. Recently, we have seen other rides like Rock ‘n’ Rollercoaster Starring Aerosmith leave Guests stranded at the “highest hill” and numerous lights on ride throughs like this one of Rock ‘n’ Rollercoaster at Disney’s Hollywood Studios and Peter Pan’s Flight in Magic Kingdom.

Have you ever been evacuated from an attraction at a Disney Resort? Let us know in the comments below!