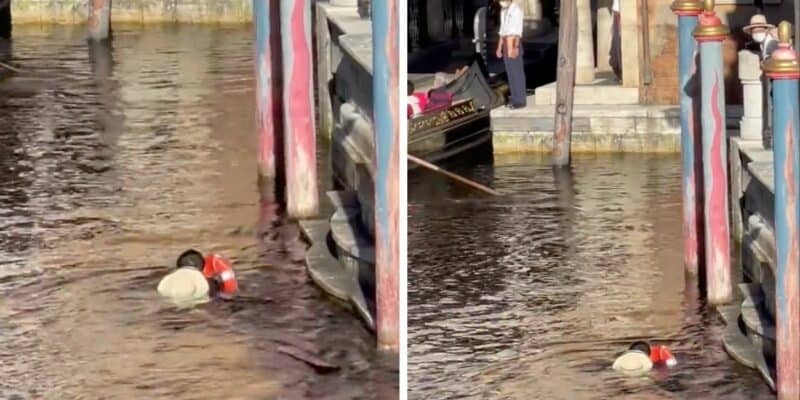 When you think of swimming at the Disney Parks, the thought of plopping into a pool at Typhoon Lagoon or Blizzard Beach at Walt Disney World Resort would typically be what comes to mind. But seeing a Cast Member dive into the Venetian Gondolas canals at Tokyo DisneySea would probably not be the first thing that comes to mind.

When it comes to having water around at the Disney Parks, there is always a chance that a Cast Member will have to enter that water if ever needed. We tend to see this happen the most with water attractions such as Pirates of the Caribbean or “it’s a small world” when the ride breaks down, and Guests must be evacuated. But at times, Cast Members may have to take a swim to retrieve a missing item.

When translating the Tweet, it seems the user noted:

Luckily, the Cast Member was close to the edge of the dock, and with the life preserver, was able to stay afloat. Cast Members who enter water areas such as this are always trained to do so when going in with a purpose, as it seems this Cast Member did, to ensure their safety.

Have you ever seen a Cast Member enter a water area at any of the Disney Parks? Let us know in the comments below!

Let the expert team at Academy Travel help you plan your next magical vacation to Tokyo DisneySea Resort or Tokyo Disneyland! Or, you can even stick to Walt Disney World Resort’s four theme parks — Magic Kingdom, EPCOT, Disney’s Animal Kingdom, and Disney’s Hollywood Studios — and the Disney Springs shopping and dining district!