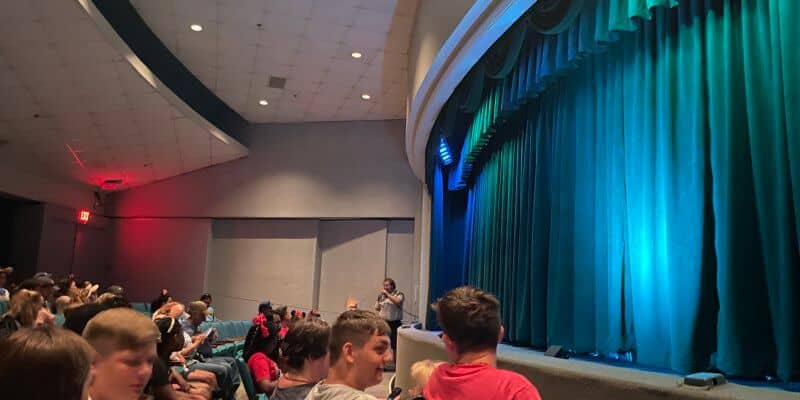 When Guests visit Walt Disney World Resort, some of their most memorable moments often occur because of Cast Members.

Cast Members have the ability to make the regular Disney World experience even more magical. From snapping the perfect PhotoPass picture to making a crying child laugh by giving them a free Mickey Premium Bar, we have seen Cast Members add to the Guest experience time and time again. Personally, I am a big fan of Cast Members that make attraction experiences unique no matter how many times you ride!

While riding Carousel of Progress over the past weekend, we were able to have a Cast Member spice up the attraction’s intro. Typically, Carousel of Progress is a very relaxed attraction, Guests stroll in and take their seats, and the Cast Member alerts them that they must stay seated for the 20-minute duration of the show. However, this time, the Cast Member was cracking jokes and making the entire audience laugh! It felt like I was at a comedy show, and Disney had brought out the warm-up comic to get the audience warmed up for the big show.

The best part came towards the end. The Cast Member alerted the audience that the Carousel of Progress recently underwent changes and added a new addition to the attraction — seat belts. He asked the audience to reach to their right and put on the seat belt, and then pull the yellow tab so he could go around and check.

We had a packed house on the ride, as it was raining that evening, and to my surprise, everyone began looking for their seatbelt! I instantly burst out laughing, knowing that the Cast Member tricked the entire audience. Once everyone else realized, there was a lot of laughter in the building, and everyone was in great spirits during the show.

Once the show ended, the audience erupted in loud clapping, which is something that you do not typically always see on Carousel of Progress. It seemed pretty clear that everyone had a fantastic time, and I think the Cast Member’s introduction to the ride was cause for that.

Have you ever been tricked by a Cast Member before? Let us know your story below!