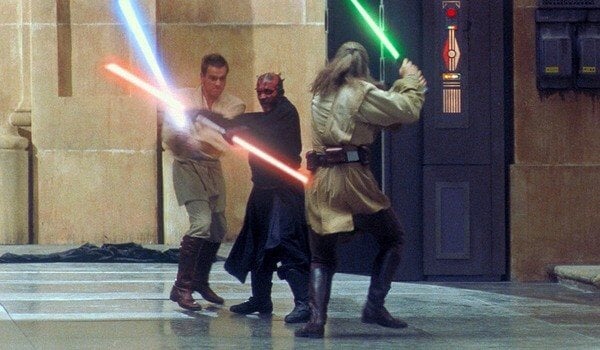 One of the most highly anticipated Star Wars shows that is set to debut next year is Obi-Wan Kenobi. Directed by Mandalorian alum Deborah Chow, the special event series will see the returns of both Ewan McGregor (Jedi Knight Obi-Wan Kenobi) and Hayden Christensen (Darth Vader/Anakin Skywalker) in their prequel trilogy roles.

The duo — who both last appeared in the Star Wars universe in Star Wars: Episode III – Revenge of the Sith (2005) — is joined by fellow prequel trilogy alums Bonnie Piesse (Beru Lars) and Joel Edgerton (Owen Lars). Star Wars newcomers like Indira Varma (Game of Thrones), Rupert Friend, O’Shea Jackson Jr., Sung Kang (The Fast and the Furious), and Simone Kessell will also appear in the show.

It is not yet known who will play young Luke Skywalker as a Tatooine farmboy under the care of his aunt and uncle, though McGregor himself has shared that Luke’s childhood will be explored.

Although plot details surrounding Obi-Wan Kenobi are scarce, Kennedy promised that Star Wars fans are in for the “rematch of the century” when Darth Vader and his former Jedi Master have their third lightsaber battle in the Star Wars story.

Furthermore, we know that the show will be set on Tatooine approximately 10 years after Emperor Palpatine (Ian McDiarmid) executed Order 66 in Revenge of the Sith. This opens the door for the live-action debuts of numerous Star Wars Rebels animated characters, including Vader’s Inquisitorius.

“Star Wars” really is about the fans.

So much so that some of the most die-hard will be seen in the Disney Plus series “Obi-Wan Kenobi,” starring Ewan McGregor.

So says Maya Erskine, the “Pen15” co-creator and co-star who appears in the “Star Wars” spinoff. “The extras were incredible on the set, and a lot of them were mega ‘Star Wars’ fans,” Erskine tells me on this week’s episode of the “Just for Variety” podcast in a joint interview with her “Pen15” cohort Anna Konkle. “One guy, he was so nice and he lifted up his sleeves and had ‘Star Wars’ tattoos over his whole body. And they build droids. There are lot of ‘Star Wars’ fans that build droids, and then the production companies will rent [them] from the fans.”

Obi-Wan Kenobi does not have an official premiere date, but the sizzler is currently streaming on Disney+ and episodes will drop sometime in 2022.

What do you think about Deborah Chow and her team secretly casting Star Wars superfans?