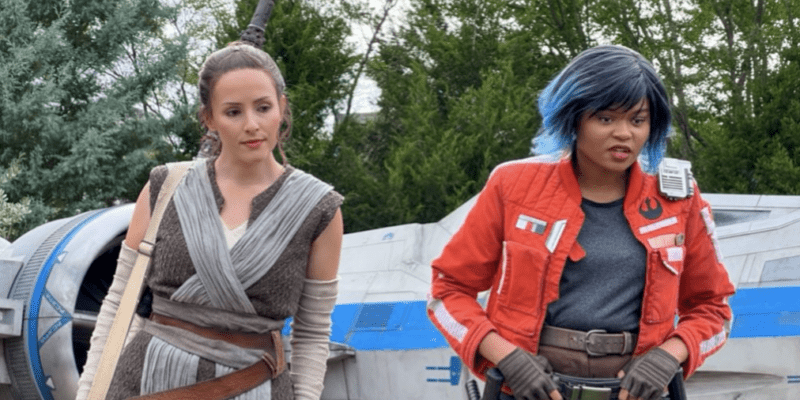 When Walt Disney World Resort in Orlando, Florida reopened in July 2020 following its four-month-long pandemic-related closure, many experiences were different. There were no fireworks, no parades down Main Street, U.S.A — or anywhere else — and no traditional character meet and greets.

Now, many experiences have returned — although Guests age 2 and over must still comply with CDC guidance in regard to face masks and character “sightings” remain socially distanced — and Guests at Disney’s Hollywood Studios have recently noticed something exciting about certain Star Wars: Galaxy’s Edge characters.

As Thrill Geek noted on Twitter, Vi Moradi — Princess Leia’s spy (and she’s very cool) for those unfamiliar with the character — and Rey from the Star Wars sequel trilogy have started once again appearing at their pre-pandemic spot by an X-wing fighter:

It is important to note that, while Vi and Rey are back in the same location they were at before Disney World’s COVID-19 closure, Guests must remain at a safe social distance, for now, to take photographs and interact with the Star Wars characters.

This rule remains in place at all four Walt Disney World Resort theme parks — Magic Kingdom, EPCOT, Disney’s Hollywood Studios, and Disney’s Animal Kingdom. It is not known how many characters throughout Disney World property have moved back to their pre-pandemic locations at the time of publication

Beginning March 1, 2022, Guests who choose to stay onboard the Halcyon luxury starliner — AKA the Star Wars: Galactic Starcruiser hotel — will have the chance to meet Rey, Chewbacca, Kylo Ren, and more brand new Star Wars characters in close quarters.

The first-of-its-kind Resort hotel will “transport” Guests to a galaxy far, far away, allowing them to become part of the Star Wars story with a fully immersive experience that includes a “port excursion” to Batuu’s Black Spire Outpost — and rides on both Millennium Falcon – Smugglers Run and the incredible Star Wars: Rise of the Resistance.

Are you excited that Disney World characters are returning to their pre-pandemic meet and greet spots?

Comments Off on Disney World Characters Are Moving Back to Pre-Pandemic Locations!