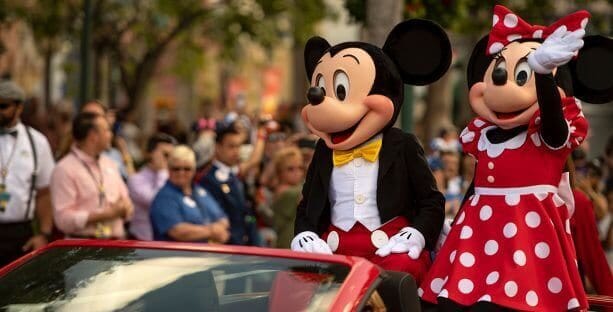 When Walt Disney World Resort reopened in July 2020 following its pandemic-related closure, there were numerous changes Guests had to get used to. One notable change in the Disney World experience was the fact that parades — which occurred at regularly scheduled times each day — were replaced with character cavalcades.

Unlike parades, Disney World cavalcades do not run at specific times — instead, the pop-up character sightings can happen any time of day! There are various cavalcades at each Walt Disney World Resort theme park — EPCOT, Magic Kingdom, Disney’s Hollywood Studios, and Disney’s Animal Kingdom.

As you can see [above], the Disney Junior cavalcade at Hollywood Studios features fun characters like Doc McStuffins and Vampirina. There are also cavalcades [below] that feature iconic Disney Parks characters like Mickey Mouse, Minnie Mouse, Goofy, and Chip and Dale!

While some Disney World Guests prefer cavalcades to parades, there’s no denying that it can be harder to catch glimpses of your favorite characters when you don’t know exactly when they’ll be passing by.

Fortunately, TikTok user Dating Disney has provided a surefire tip to help you know when characters are coming during your next visit to Disney’s Hollywood Studios Park.

“When the music gets louder, that means the characters are coming!”

Dating Disney also advised those who are looking for their favorite Disney Park characters to stand to the left of the Chinese Theater — which houses Mickey and Minnie’s Runaway Railway — as the character cavalcades all turn left there.

At this time, Disney has not confirmed when — or if — cavalcades will be replaced with traditional parades. We do know, however, that there will be four special Halloween BOO BASH cavalcades at Magic Kingdom Park this fall and that Santa Claus will be returning in a motorcade at Disney’s Hollywood Studios this holiday season, indicating that Disney World’s cavalcades aren’t leaving anytime soon.

Will you be using the simple, but little-known, trick to listen to the music to find your favorite DHS characters? Which character cavalcade is your favorite?