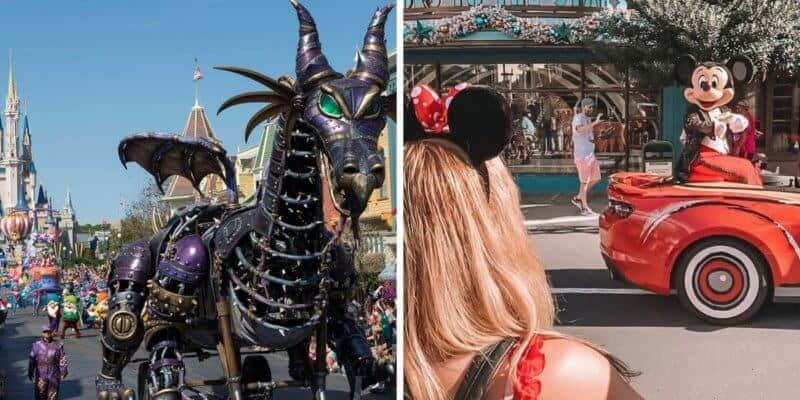 When Walt Disney World reopened its theme parks to the public after the temporary closure last year, it also brought several changes. One of those changes was replacing parades, such as Festival of Fantasy at Magic Kingdom, with pop-up cavalcades, which feature a handful of Disney characters on small parade floats, carriages, or riverboats that appear randomly throughout the day, to help alleviate crowds.

Now, as we continue to move forward, and as Disney continues to modify its operations — Including the fact that nighttime spectaculars are coming back — Many are left wondering, what will happen with parades?

Related: When Will Parades Return to Walt Disney World?

Well, Walt Disney World recently announced a brand-new cavalcade will be coming to Magic Kingdom for the 50th anniversary, meaning that at this point in time, Disney is clearly still planning cavalcades for later this year. With this being said, our Inside the Magic audience did not hold back when it came to how they feel about the current pop-up cavalcades. In fact, a handful of people would rather Disney get rid of the cavalcades and bring back parades.

One reader, Rob, expressed that parades are what makes Disney World stand out from the other theme parks:

I’m not a parade person per se but definitely a Disney parade person. Fireworks and parades are a major part of our Disney experience. Because of this, and we used to be yearly goers, we are not planning a trip to Disney World anytime soon. We can go to other theme parks that are significantly cheaper just to “ride rides”.

And another ITM reader, Brian, expressed how he really feels about cavalcades:

That’s terrible news in my opinion. Calvcades are lame and last 30 seconds, makes 0 sense that they have dropped masks everywhere, brought back fireworks, done away with social distancing but aren’t going to bring back parades OR character meet & greets.

Josh U. explained that he likes the idea of cavalcades, but sometimes they can be hard to catch, so maybe Disney could have both:

The cavalcades are great for odd times throughout the day but you need an actual parade with a posted time. Many people are on rides when the cavalcades come through and they miss them. It took three different visits to Epcot to finally see the princess cavalcade.

And one of our Facebook followers, Michelle M., also had an idea to where Disney could do both Festival of Fantasy and the 50th cavalcade:

Just a thought, but they could bring back Festival of Fantasy for the once a day parade and then do the 50th cavalcade at intermittent times the rest of the day. That’s kind of how the Move it Shake it party was.

On the other hand, many Disney fans would actually prefer the cavalcades over the parades. In fact, Shelby R. said she feels the cavalcades make it easier to see characters:

I’d rather have the cavalcades. It’s easier to see characters that way

This is something another ITM Facebook follower agreed with. Shannon F. shared:

Keep the calvacades!! Much better IMO. We saw so many more characters that way and didn’t have to wait in line. They were great and we managed to see them all without big crowds!

All in all, it seems as though Disney World Guests are enjoying the pop-up cavalcades, but are also missing the parades such as Festival of Fantasy since they had a scheduled time. Many hope to see Disney keep the cavalcades and also bring back parades so that the theme parks can host both offerings!

At this time, there is no word on when Disney World will be bringing back parades, but Inside the Magic will update you as we get information.

What do you think? Should Disney do away with cavalcades or would you like to see the theme parks offer both cavalcades and parades? Let us know in the comments below.