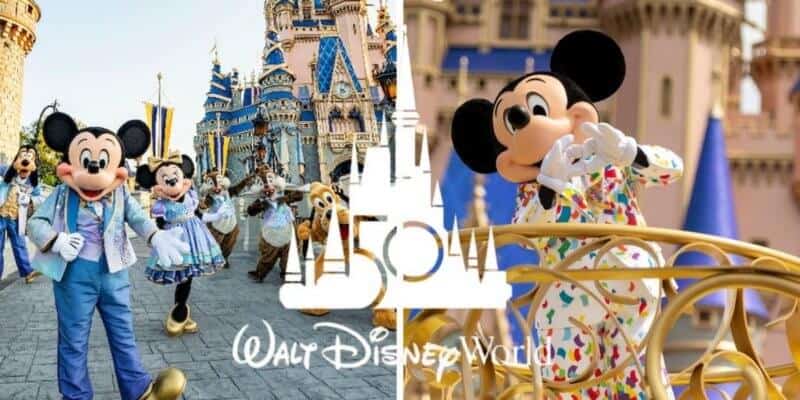 Now, we are learning that Guests will also get to experience a brand-new cavalcade coming to Magic Kingdom, just for the 50th anniversary!

When discussing the Disney characters that will be part of the 50th anniversary, Disney Parks Blog shared:

Mickey Mouse and Minnie Mouse will be your hosts for “The World’s Most Magical Celebration,” and they’ll be decked out in sparkling new EARidescent fashions for the 50th anniversary. As you can see in the photo above, their best pals want to get in on the shimmer, too, as Donald Duck and Daisy Duck, Goofy and Pluto, and Chip ‘n’ Dale will be sporting their own custom-made EARidescent looks beginning Oct. 1.

But that’s not all because Disney Parks Blog also shared that these characters will appear in a new cavalcade:

You’ll get a chance to see them when they travel through Magic Kingdom Park several times daily in the new “Mickey’s Celebration Cavalcade.”

So if you are planning a visit to Magic Kingdom during the 50th anniversary, make sure to keep an eye out for the new Mickey’s Celebration Cavalcade as Mickey, Minnie, Donald, Daisy, Goofy, Pluto, Chip, and Dale will all be in their EARidescent outfits, waving to Guests from the floats!

Are you excited to see a new cavalcade coming to Magic Kingdom for the 50th anniversary? Let us know in the comments below.