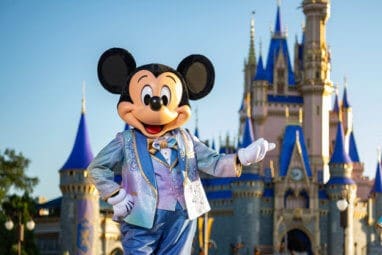 As the Walt Disney World Resort continues to celebrate its 50th anniversary and reopen experiences and attractions after the pandemic, it looks like Disney Guests are finally able to meet the most famous mouse of them all.

That’s right, for the first time since March 2020, Mickey Mouse will be donning his 50th anniversary outfit and greeting Guests in Magic Kingdom.

Amid the ongoing COVID-19 pandemic, meeting fan-favorite Disney characters at places like Princess Fairytale Hall and Town Square Theater, as well as at dining locations, has been off the Disney Parks map for well over a year.

Though Guests could spot their favorite Disney characters in cavalcades during the phased reopening, Guests could not get individualized time with them. Now, both Princess Fairytale Hall and Town Square Theater will reopen at Magic Kingdom as Disney Princesses and Mickey Mouse return for meet and greets, albeit modified.

With entertainment returning across the Central Florida Resort, including Festival of the Lion King over at Disney’s Animal Kingdom, meet and greets were revealed to be coming back with a new name: “sightings”.

Now, in a surprise early appearance, Mickey Mouse is meeting Guests at the Town Square Theater in the Magic Kingdom theme park!

Disney Guests were thrilled to see the iconic mouse in his new EARidescent 50th anniversary suit, waving to Disney Guests and posing for photographs:

Mickey sure does look happy to be back meeting Guests in the Park! It appears stanchions with rope are set up to keep Guests separated from Mickey, while the theming of his wardrobe backdrop has also been updated.

BREAKING: Mickey Mouse has returned to the Town Square Theatre at Magic Kingdom! He now dawns his 50th anniversary outfit

While these “sightings” don’t necessarily capture the same Disney magic a pre-pandemic meeting did, it shows that the Walt Disney World Resort is managing the health and safety of both Guests and Cast Members in this unprecedented period.

Beginning October 19, the Disney Resort debuted Disney Genie, Disney Genie+, and the new FastPass+ replacement attraction entrances, Lightning Lane, meaning Guests can now skip the standby lines at rides like Star Wars: Rise of the Resistance and Remy’s Ratatouille Adventure for an additional cost. The digital service has been plagued with issues and a divided reaction from Guests.

Which character are you excited to see return with a meet and greet in the Parks? Let us know!