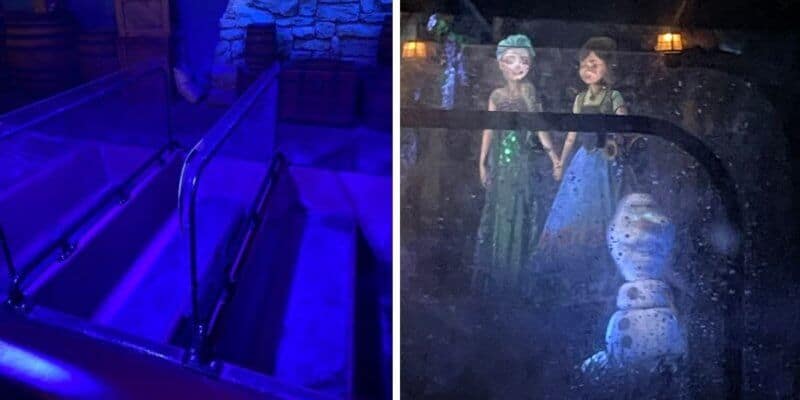 Disney World has had to make any changes to adapt to the ongoing pandemic, and although some of those changes are slowly reverting to normal, others seem to remain intact.

Recently, Disney World stepped into a more “normal” direction, as masks are now only required while Guests are indoors or in an attraction queue, temperature checks are gone, social distancing is now reduced, and Disney CEO Bob Chapek announced capacity been increasing from the previous 35%.

All of that being said, it seems that plexiglass still holds a strong place on Disney attractions. Many attractions at Magic Kingdom, EPCOT, Disney’s Hollywood Studios, and Disney’s Animal Kingdom still have plexiglass dividers not only in the queues but on attractions themselves. By having these plastic dividers on the ride vehicles, many Guests may have a slightly obstructed view as the dividers are in front of their faces.

On the popular boat ride Frozen Ever After in EPCOT’s Norway pavilion, Guests may have an even harder time seeing in front of them as the plexiglass dividers are often covered in water droplets. Recently, some Guests have discussed how the plexiglass can ruin part of the view of the attraction.

A Twitter user who goes by Remy the Ratatouille (@RemyOpenYet) took to Twitter to sarcastically complement the view of Elsa and Anna at the end of Frozen Ever After.

WOW!! Loving the view from row 4 on Frozen Ever After rn !!!

WOW!! Loving the view from row 4 on Frozen Ever After rn !!! pic.twitter.com/MOfclGVFHd

Through the plexiglass, not only is the view unclear, but it sure does look like Anna and Elsa are having quite the tear-filled breakdown.

As the Twitter thread continued, Juliet (@frozenepcot) brought up a good point noting:

Remy the Ratatouille acknowledged this, however, still wants the plexiglass out.

This is true. But, these plexiglass MUST go

This is true. But, these plexiglass MUST go

Amy chimed in stating that she thinks the plexiglass will be gone, much like many of the other protocols that have begun to disappear:

Luckily I think it will be gone in a few days

Luckily I think it will be gone in a few days ?

Responses to that Tweet followed suit with a positive feeling when it comes to getting rid of plexiglass.

DocHart (@DocHart16) seems to also want the plexiglass out, especially on this attraction saying:

Still!! The absolute worst plexiglass in all of WDW!

Still!! The absolute worst plexiglass in all of WDW!

An Inside the Magic reader also recently shared her thoughts on plexiglass:

The plexiglass on some of the rides (Frozen, Millennium Falcon, Rise of the Resistance, Mickey and Minnie’s Runaway Railroad, Living with the Land, Kilimanjaro Safari, etc.) is extreme overkill and completely ruins these rides IMO. I will not be back till these barriers have been removed. And, as someone who has also recently been to the parks, I can say that in my experience some rides absolutely were packed FULL, and other rides were not, so it obviously depends on the attraction, and I would assume that attendance plays a roll.

It will be interesting to see if Disney World chooses to remove plexiglass from all attractions in the near future, especially with Orange County possibly entering Phase 3 of Mayor Jerry Demings’s plan to eliminate the face mask mandate and pandemic-era restrictions continuing to loosen at Walt Disney World Resort.

How do you feel about plexiglass on attractions at Disney World? Let us know in the comments below!