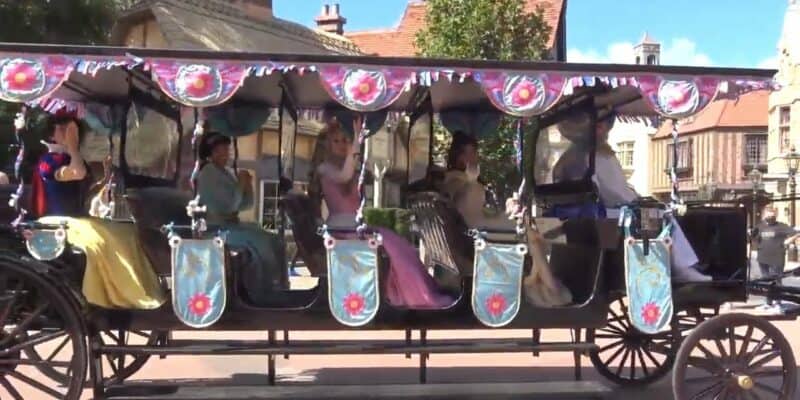 Although Disney World has come a long way since the beginning of the pandemic, there is still a lot more that needs to be done for the theme parks to return to a normal state of operations.

One of the biggest changes we continue to see is the lack of meet and greets for health and safety reasons, which have led to character interactions from a distance. We also have seen parades replaced with much shorter but frequently running cavalcades. Guests can wave to their favorite character and then head to Splash Mountain, Haunted Mansion, or whatever attraction is calling to the next!

At EPCOT, we originally could only interact with Anna and Elsa in the Norway pavilion, as the other princesses were on a cavalcade. Lately, we have started to see princesses such as Aurora and Snow White interact with Guests as well, and now it seems Disney World is shifting to that motto when it comes to the princesses instead of cavalcades.

The Princess Promenade Cavalcade is now removed from the Walt Disney World website, which means EPCOT no longer has any cavalcades available for Guests to see. Luckily, the princesses are seemingly available for meet and greet periodically throughout the day in World Showcase, so Guests can spend more time interacting with them as they appear!

If you were a fan of the princess cavalcade, do not fret! Magic Kingdom still runs their princess cavalcade multiple times a day. Plus, with World Princess Week beginning tomorrow, there has never been a better time to visit your favorite Disney princess.

This change makes EPCOT the first Disney World Park to completely remove cavalcades as a whole. It will be interesting to see if other Parks change to this model and offer more character interactions throughout the Park, instead of solely using cavalcades as the main source of integrating characters into the Parks.

We also recently reported on Princess Fairytale Hall at Magic Kingdom receiving new signage, which could mean that we will soon see characters return to the location. That is purely speculation at this point, but it is interesting to see character meet and greet locations get a refresh before the 50th-anniversary celebration!

Are you sad to see the princess cavalcade leave EPCOT? Or do you prefer seeing them around the World Showcase instead?