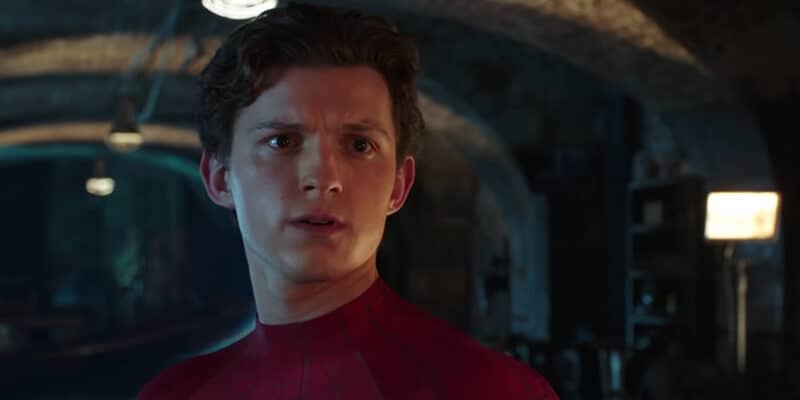 Now that the first Spider-Man: No Way Home trailer — which dropped on August 23, 2021 — has confirmed that Willem Dafoe’s Green Goblin will be one of the Spidey villains to appear in the conclusion to the MCU’s Spider-Man trilogy, leading man Tom Holland (Peter Parker/Spider-Man) can finally do his favorite thing and reveal on-set secrets.

Holland recently spilled details about his shock upon meeting Dafoe for the first time, completely by surprise:

“It’s actually a funny story when I met Willem for the first time. Obviously, at that time, all of the villains in the film, it was a huge secret that they were in the film. So they would walk around set with these cloaks on. Naturally, these guys were very excited to be coming back and bringing these roles back to life,” Holland revealed. “I just sort of bumped into this guy in a cloak. I was like, ‘Watch out, mate.’ He took his cloak off, and I almost got really scared — Oh sh**, the Goblin’s here.”

Dafoe portrayed Norman Osborn/Green Goblin in Sam Raimi’s (Doctor Strange In the Multiverse of Madness) Spider-Man trilogy that starred Tobey Maguire and Kirsten Dunst. The films released between 2002 and 2007.

Maguire and Dunst’s involvement in No Way Home has been denied, but many Marvel fans are convinced that the duo — along with former Spider-Man actor Andrew Garfield — will make cameos, breaking the “Spider-Verse” wide open.

Although Holland didn’t go so far as to confirm details of how the Marvel Multiverse will play into No Way Home, he did share his excitement about working with legendary actors from the super hero franchise:

“It was interesting having those guys come in because they have a certain ownership over Spider-Man in their own way, and…I’m talking about Alfred [Alfred Molina as Doctor Octopus] and Jamie [Jamie Foxx as Electro] and those guys. To see Alfred come in, and have to adapt and change to the way that the films are made, but also change director, and also [the fact that] I’m now Spider-Man. It was really interesting to see these actors adapt and change what they were doing to fit the modern era.”

Are you looking forward to No Way Home‘s release?