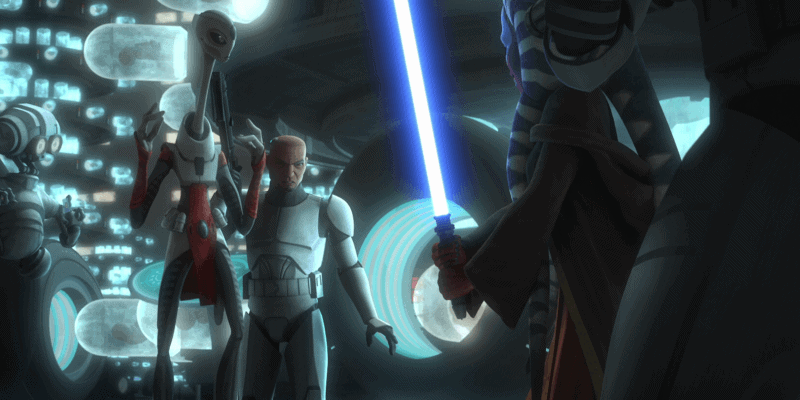 Star Wars: The Bad Batch has done an excellent job of filling in quite a lot of unknown history about the days and weeks after the execution of Emperor Sheev Palpatine’s Order 66, when the Republic fell and the Galactic Empire took hold across the Star Wars galaxy.

From answering questions about Supreme Leader Snoke to helping Star Wars fans understand why clone troopers are really better than stormtroopers to introducing the Star Wars franchise’s “missing link”, so to speak, in the form of Omega (Michelle Ang), The Bad Batch has truly been Dave Filoni’s “master class”.

Related: ‘Star Wars’: ‘The Bad Batch’ Is Fixing the Big Problems With Order 66

In last week’s first part of the two-part Season 1 finale, Episode 15 (“Return to Kamino”), Clone Force 99 — Hunter, Wrecker, Tech, Echo, and Omega — have a run-in with their former compatriot, and current Imperial Commander, Crosshair, and ultimately return to their home planet of Kamino for the first time since they were driven out by Grand Admiral Tarkin.

One of the key points of the penultimate episode of the season is Omega showing The Bad Batch Nala Se’s secret lab, right down to the tanks where they were created.

Then, an even more crucial moment occurs — the Star Wars franchise confirmed what happened to Kamino for the very first time, and the news is not good for those who considered the planet home.

As Clone Force 99 desperately attempted to escape Kamino while an Imperial fleet of Venator Star Destroyers obliterated the now-defunct cloning facilities on the planet, Omega looked on while her homeworld was destroyed.

Although Star Wars fans already knew Kamino became an “obsolete” location after Tarkin and Palpatine began using stormtroopers in place of the Clone Army of the Republic, The Bad Batch Episode 15 confirmed the planet’s destruction for the first time.

Related: ‘Star Wars’ Just Retconned Everything We Knew About Clones

This throws a bit of a wrench into including one popular Star Wars Legends story — that it seemed The Bad Batch was barreling straight toward — in the existing Star Wars canon. The Kamino uprising was first seen in the 2005 Star Wars Expanded Universe video game, “Star Wars: Battlefront II” by LucasArts.

Upon learning of the insurrection, the Galactic Empire hired renowned bounty hunter Boba Fett, himself a clone of Jango Fett, to penetrate and sabotage the cloning facilities of Tipoca City. Fett’s childhood spent in the city granted him intricate knowledge of the facility’s layout, and he led the Imperial Army to a crushing defeat of the “anti-clone” army. The Kaminoan leadership themselves were destroyed when their escape transports were shot down as they attempted to flee. Before the battle’s end, Fett extracted a sample of the Jango Fett DNA and delivered it to his Imperial clients. The uprising led to a restructuring of the Imperial cloning policy; the previous model of centralized cloning sources was abandoned in favor of having a wide variety of cloning centers and genetic templates.

Since we know Filoni isn’t afraid of drawing on Legends materials for his various series — the introduction of Grand Admiral Thrawn in both Star Wars Rebels and The Mandalorian, and the potential debut of Mara Jade Skywalker, for example — it seemed likely that the Kamino uprising would factor into The Bad Batch’s season finale, particularly given the involvement of Boba Fett, who is likely to show up, in the conflict.

Now, that is more uncertain. Even if The Bad Batch does feature a clone uprising, perhaps spurred by new fan-favorite Captain Howzer, it may occur on a different planet.

As one article pointed out:

While Boba Fett was previously involved in the Kamino uprising in Battlefront II, the destruction of Tipoca City in The Bad Batch will likely change his role in the conflict if the rebellion occurs on another planet…Boba was specifically hired by the Empire because of his personal knowledge of Tipoca City’s layout, having spent much of his childhood at the facility. While the conflict might’ve been a complex way of introducing Omega’s “brother” in The Bad Batch by having Boba betray his fellow clones, Boba’s involvement in the conflict is no longer necessary if the Kamino uprising occurs elsewhere.

For now, all we can do is wait until Friday.

Do you think the Kamino uprising will become Star Wars canon somehow?