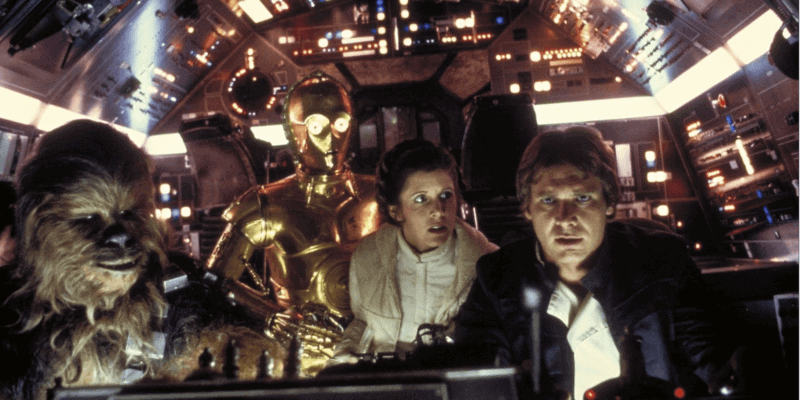 When most moviegoers think of the Star Wars franchise in this day and age, the potential of low pay for the actors probably isn’t a concern that immediately comes to mind.

Granted, Ford had an incredibly Hollywood career in the intervening four decades, but the pay for modern Star Wars cast members certainly doesn’t seem to be under the industry average. Both Mark Hamill (Jedi Knight Luke Skywalker) and the late Carrie Fisher (Princess General Leia Organa) made similar sums for their appearances in the Star Wars sequel trilogy.

Now, however, popular British comedian, Nick Frost, has shared that the pay for participating in Star Wars isn’t always worth it — at least for smaller roles. The Hot Fuzz (2007) and Shaun of the Dead (2004) star recently told the Celebrity Catch Up: Life After That Thing I Did podcast:

“It was only a little bit but I was like, it’s really small, the pay’s rubbish… I’ve got a family, I don’t do this for free. I mean I like Star Wars, I like watching it. I don’t want to watch it and think: ‘Look at your ugly mug.'”

“There’s a part of me that thinks, ‘you could have been in Star Wars’…I tend to not to look backwards at all, so that doesn’t really affect me as a choice I took because I think, well, it’s done. I’ve made the decision.”

Interestingly enough, Frost’s real-life friend and frequent co-star, actor Simon Pegg, did play a small part in the Star Wars sequel trilogy. He portrayed Jakku junk boss Unkar Plutt in The Force Awakens. Although Pegg is primarily a comedic actor, he had ventured into sci-fi once before as Scotty in Star Trek (2009).

Frost did not share whether or not he was offered a role alongside Pegg or if his role would have been in The Mandalorian or another Star Wars project.

As Movie Web pointed out:

Nick Frost has continued to have a prosperous career. As of late, Frost has been doing more on the TV side of things, appearing in Into the Badlands as well as True Seekers [Frost played Gus Roberts], which he produced alongside Simon Pegg for Amazon. Though the show was canceled after just one season. Frost is currently filming the show The Nevers. Frost and Pegg have also said they intend to reunite with director Edgar Wright at some point down the line, though they are all quite busy which has made that complicated. The three of them last collaborated on The World’s End, which concluded the Cornetto Trilogy.

Should Frost (or his buddy, Pegg) ever want to return to the Star Wars universe, there are likely to be opportunities down the road.

What Nick Frost is Doing Now

As for Frost, now that his supernatural comedy series exploring haunted churches, underground bunkers, and abandoned hospitals with Pegg has been canceled, he still has several projects in the pipeline. Interestingly, none of them involve his frequent collaborator at this time.

As previously mentioned, Frost is filming The Nevers, in which he will play a character named Declan Orrun. He is also doing voice work for Trollhunters: Rise of the Titans and has a film called Captain Pugwash in pre-production.

It is not yet known when the two will work together again — or if either of them will be part of the Star Wars galaxy moving forward.

What do you think about a popular actor turning down a Star Wars role, even though it was a bit part?