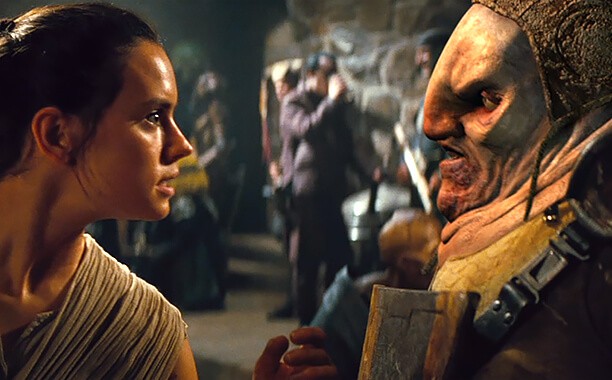 Actor and comedian Simon Pegg (Shaun of the Dead, The World’s End, Hot Fuzz) is most well-known in the sci-fi genre for his portrayal of Scotty in Star Trek (2009).

Some movie fans don’t realize, however, that Pegg also had a cameo in the Star Wars sequel trilogy. He played Unkar Plutt in Star Wars: Episode VII – The Force Awakens (2015).

Plutt, a hulking member of the Crolute species, was a junk boss who purchased all manner of scrap and weaponry scavenged from wrecked Imperial and Rebel ships that had been lost during the Battle of Jakku. Wookieepedia shared these details about the character, who Rey (Daisy Ridley) interacts with early in The Force Awakens:

The ruthless Unkar used hired thugs to enforce his stranglehold on barter, sending them to punish any scavenger who dared dabble in unauthorized trades or negotiated too aggressively. The Blobfish—as scavengers called him behind his broad back—had collected all manner of weapons, gears, and ships over the years, including a battered Corellian freighter he kept under a tarp on the outskirts of Niima Outpost.

Now, Pegg has returned to Jakku — or at least the real-world location where Jakku scenes were filmed. The actor posted on Instagram:

Went back to Jakku today. Sand Boarding in the same spot we shot Force Awakens 7 years ago. Dropped a bit of weight since then. Probably less portions. #starwars

The comedic actor has previously expressed interest in returning to the Star Wars universe, so it’s possible we could see Unkar Plutt — or Pegg in another role altogether — in the future. Most recently, fans were pleasantly surprised to see Pegg and Nick Frost reunite for thriller-comedy, Truth Seekers, which sees the duo exploring abandoned hospitals, haunted churches, underground bunkers and more.

Are we likely to see Jakku in Star Wars again?

All three core members from the Star Wars sequel trilogy — Ridley, Oscar Isaac (Poe Dameron), and John Boyega (Finn) — have expressed that they do not plan to return to the Star Wars franchise.

This means we’re unlikely to see any of the sequel trilogy characters back on Rey’s homeworld in the future. However, it is certainly possible that planet Jakku will show up again in another Star Wars movie or streaming series.

If there’s one thing that’s true about the Star Wars universe, it’s that everything is connected — and the creative team behind the franchise loves to incorporate callbacks to previous projects.

After Mark Hamill’s vocal dislike of Luke Skywalker’s storyline in Star Wars: Episode VIII – The Last Jedi (2017) and Star Wars: Episode IX – The Rise of Skywalker (2019), for example, who would have imagined he would ultimately return as the Jedi Knight in The Mandalorian?

Another iconic desert planet is set to factor prominently into Star Wars‘ next chapter, as well. Tatooine will return in The Book of Boba Fett, a Mandalorian spinoff show set to debut in December 2021.

Rumors abound that a CGI version of Han Solo (Harrison Ford) could potentially appear on the remote desert planet, perhaps at the Mos Eisley Cantina. The same technology that was used for Hamill’s Skywalker Mandalorian appearance and Princess Leia’s cameo in Rogue One: A Star Wars Story (2016) could again be employed.

Would you like to see Jakku make its way back into the Star Wars saga, even without Rey?

If you want to return to Jakku now, you can visit the planet in the Star Wars Battlefront and Battlefront II video games. Battlefront offers two Battle of Jakku maps, while Battlefront II features one Jakku map, based around an Imperial Star Destroyer left behind by the Galactic Empire.