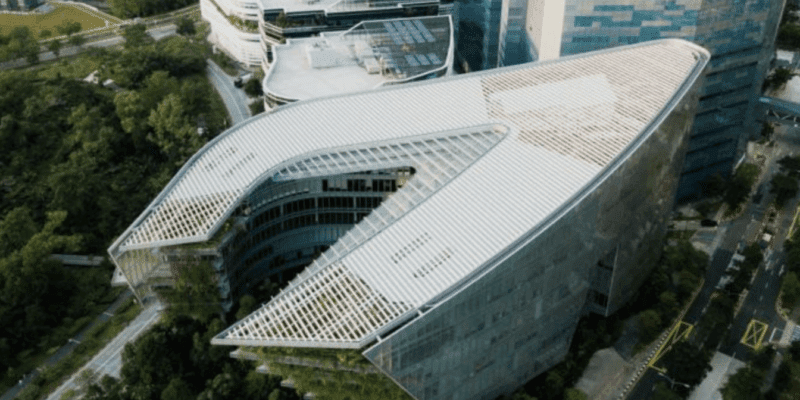 In 2013, Lucasfilm completed construction on their impressive Sandcrawler Building in Singapore.

The facility was designed to look like the Jawas’ Tatooine Sandcrawler vehicles that first appeared in the original trilogy in Star Wars: Episode IV – A New Hope (1977) and, most recently, in The Mandalorian Season 2, Episode 1 (“Chapter 9: The Marshal) when Din Djarin (Pedro Pascal) learns the story of how Cobb Vanth (Timothy Olyphant) came to own Boba Fett’s iconic beskar armor. It was presumed that it would serve as a long-term operational base for The Walt Disney Company.

Not so, it seems.

The Hollywood Reporter has shared that the impressive structure is reportedly being purchased by U.S. firm, Blackstone, for upwards of $100 million. Per their report:

Spanning nearly 250,000 square feet, the building is located in a southwest Singapore suburb. The property includes a 100-seat theater, retail shopping areas and a “Yoda fountain” surrounded by tropical gardens.

Blackstone has already submitted to Singapore’s regulatory authorities for approval to close the transaction, according to Bloomberg, which was the first to report on the deal. The business wire cited unnamed sources with knowledge of the the transaction.

Neither Walt Disney Company nor Lucasfilm executives have commented on the reported sale of the Sandcrawler Building at this time. It is currently unknown where Disney’s Singapore headquarters will move to or if Southeast Asian operations are being consolidated in some way.

The exact sale price is not known. The Hollywood Reporter indicates the sale is for $132 million, while The Straits Times indicates it is for $175 million.

What’s next for Lucasfilm?

Lucasfilm has a huge array of projects coming down the pipeline at this time. At Disney’s 2020 Investor Day event, Kennedy shared details about approximately 11 new Star Wars series coming to the Disney+ streaming platform over the next few years, including The Mandalorian Season 3 and two spinoffs titled Ahsoka and Rangers of the New Republic.

Star Wars fans are also excited about Lucasfilm Animation‘s Star Wars: The Bad Batch and a third Mandalorian-centric series, The Book of Boba Fett, both set to premiere in 2021.

It seems that Lucasfilm may be moving away from the trilogy format they have previously used for film releases.

Lucasfilm has previously indicated, however, that they may move away from trilogies in future theatrical endeavors now that the Skywalker Saga has ended.

Star Wars: The High Republic is also keeping Lucasfilm busy, with the official launch of this new Star Wars era occurring on January 4. While this is currently a publishing initiative only, it will eventually bleed over into Disney+ shows, with Leslye Headland’s upcoming The Acolyte set during this golden age of the Jedi Order.

The series could potentially show fans the rise of Darth Plagueis, Emperor Palpatine/Darth Sidious’s master — and murder victim. We know, the suspense is killing us too.

What do you think about Lucasfilm’s future plans and the sale of the Sandcrawler Building after just seven years?