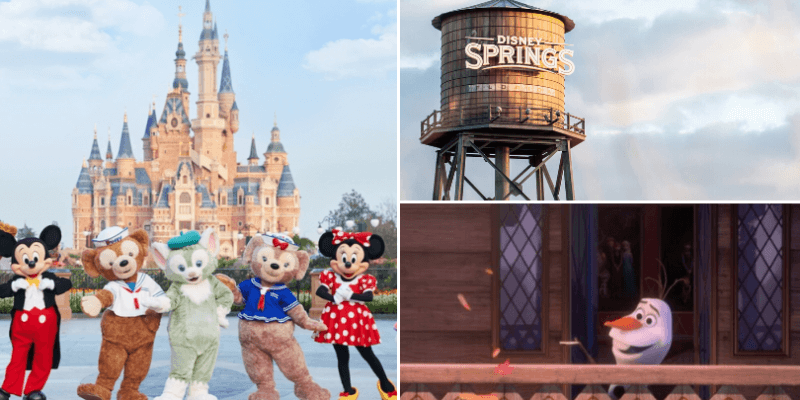 As we continue to weather this storm and search for a light at the end of this long and winding tunnel, we can lose sight of the good news that’s right in front of us. Most of the Disney Parks are still temporarily closed and many of the movies we’re excited for have been delayed. But there is plenty of Disney magic that continues to live on. Here’s some good Disney news to brighten your week.

On Monday, Shanghai Disneyland reopened to the public after being closed for nearly four months. Shanghai Disney Resort was the first Disney Resort worldwide to temporarily close due to the pandemic. And after the slow phased reopening of the resort, the Disney theme park reopened to excited guests, thankful Cast Members, optimistic Disney executives, and hopeful fans watching from around the world.

Shanghai Disneyland’s reopening day was complete with a new health and safety protocol that has been often discussed and finally put into practice at the first Disney Park to reopen amid the world’s pandemic. These new procedures included a limited capacity, temperature checks, the requirement of face masks, social distancing, a new type of character meet and greet, and more.

But even with these new requirements, Disney guests entered the park as though it still possessed as much magic as it always had. And seeing how happy Shanghai Disneyland guests were to get back to the Happiest Place on Earth proved to Disney Parks fans around the world that even with health screenings, lower capacity, and no hugs from Mickey Mouse, “Disneyland is your land,” and the theme parks will always offer us hope, inspiration, and pixie dust, no matter what.

Hope for the U.S. Disney Parks

As Shanghai Disneyland reopened, fans worldwide were given hope for the rest of the Disney Parks. Right now, Disneyland Paris and Walt Disney Studios park, Hong Kong Disneyland, Tokyo Disneyland and Tokyo DisneySea, all four parks at Walt Disney World Resort, and both parks at Disneyland Resort remain closed temporarily. But fans and frequent visitors of these happy and magical places — and specifically those of us who continue to wait for the U.S. Disney Parks to reopen — continue to have hope for the future.

When it comes to the U.S. Disney Parks, we have a lot to look forward to. Walt Disney World’s Disney Springs begins its phased reopening on May 20 when businesses not owned or operated by Disney get to reopen, and those shops and restaurants owned by Disney will begin their operations on May 27 (with World of Disney, D-Luxe Burger, and the Marketplace Co-Op reopening). Having Disney World’s shopping, dining, and entertainment district reopen after a two-month closure is considered by many Disney fans to be a huge win. It also means that Cast Members are beginning to return to work at the Most Magical Place on Earth, and we’re so happy for those who have been longing to return to their positions since being furloughed.

Though there is still no word on when Disneyland, Disney California Adventure, Magic Kingdom, EPCOT, Disney’s Hollywood Studios, and Disney’s Animal Kingdom will reopen, we’re still optimistic. Disney executives have made it clear that even though they have not announced any reopening dates yet for the domestic Disney Parks and Resorts, they are continuing to keep the health and safety of guests and Cast Members as a top priority.

Disney is also working closely with the states of California and Florida to ensure that the parks and resorts on both coasts will reopen when it is safe to do so. The encouraging words and hopeful messages from Disney representatives, Cast Members, and officials continue to lift us up and remind us that the Disney magic we know and love is not lost, even though the park gates are still closed.

When it comes to making Disney magic at home, Disney+ has got us covered. So many good news about Disney’s streaming service has come to light in the past few weeks, and we know good things will keep coming.

Hamilton with the original Broadway cast will be arriving on Disney+ in several weeks, offering longtime fans the chance to see one of their favorite productions as theatrical productions continue to be delayed. And when it comes to original content, Disney+ has provided us with new favorites like Prop Culture and Disney Gallery: The Mandalorian, which offer us inside looks into the Hollywood world that we only ever get a small glimpse of.

And every month, more amazing movies and shows are released on Disney’s streaming platform. This June, we’ll have the opportunity to stream the all-new film Artemis Fowl, which was originally planned for a theatrical release. And Disney+ is also finally getting classics like Tarzan. Read all about the latest content coming to Disney+ here.

And even though it’s not out yet, we just got confirmation that an all-new Percy Jackson TV series is coming to Disney+. This is great news for anyone who loves the books. Read more here!

And to top it off with this week’s good Disney news, our favorite snowman Olaf came out with a brand new song. The song is called “I Am With You” — performed by the original voice of Olaf, Josh Gad, and written by the Frozen songwriting team Robert Lopez and Kristen Anderson-Lopez. During the heartfelt music video (which is part of the “At Home with Olaf” series that Disney has been creating), Olaf sings to us a letter he has written to a loved one, all about how even though they may be far apart, they will always be together.

You can listen to Olaf’s new song and watch the music video below:

Want even more good Disney news? We’ve got you covered. Here’s are some more fun stories to make you smile:

We at Inside the Magic continue to keep everyone affected by the pandemic in our hearts during this time. And we’ll do our best to keep spreading Disney magic as much as we can.