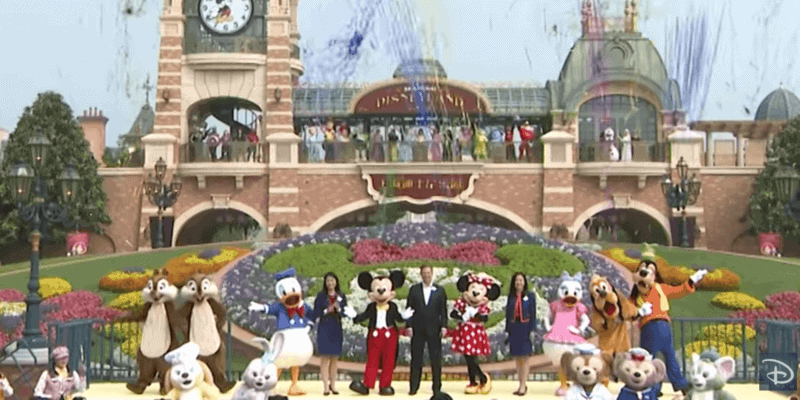 “Since the reopening of Disneytown, Wishing Star Park and Shanghai Disneyland Hotel in early March, we have been deeply moved by the encouragement from our guests and Disney fans,” said Joe Schott, president and general manager, Shanghai Disney Resort.

Hosted right alongside a beautiful and iconic “Floral Minnie,” Joe Schott was joined by both Mickey and Minnie Mouse as well as some other Disney characters to properly open the gates for the first time in forever (pun intended).

“Today, we are extremely pleased to reopen Shanghai Disneyland thanks to the unwavering efforts of our cast members and our community. Today’s celebrations will be remembered with joy, as we look forward to welcoming our guests back to this happy place,” Schott stated.

Other Disney characters also made surprise appearances, joining Mickey and Minnie at the top of the entry way. As guests of all ages entered the park for the first time in months, Disney characters like Mickey Mouse, Pluto, Donald Duck, Daisy Duck, Chip and Dale, Duffy and Friends, Disney Princesses and others began waving to welcome guests back to their happy place — Shanghai Disneyland.

Shanghai Disneyland Cast Members also joined Mickey and the gang as they were greeted with happy faces, excited to spend the day in the park.

The Walt Disney Company also wants everyone to know that they are in close contact with the local Shanghai City government to ensure everyone’s safety. The company stated:

Shanghai Disney Resort has been working regularly with local government on the reopening plan of Shanghai Disneyland. During this initial reopening phase, the park has instituted new measures and procedures, including opening with limited attendance and required advanced ticketing and reservations; accommodating social distancing in queues, restaurants, ride vehicles and other facilities throughout the park; and implementing increased frequency of cleaning and sanitization.

Shanghai Disneyland also recently released a social distancing video, which could also be a glimpse into the Untied States Parks future. Take a look here.

The Disney park has already set up several safety measures including temperature screening tents, social distancing markings, character meet and greets, and more. You can read more about this here.

We are excited to see Shanghai Disneyland officially reopen its gates to visitors so Disney guests can visit their happy place once again. We cannot wait to see what the future holds for The Walt Disney Company.

Reopening News On Other Disney Parks

Although Hong Kong Disneyland has not yet released an official reopening statement or date, they are beginning to gear up for safety protocols by setting up social distancing measures and temperature screening tents to prepare for when they welcome back Disney guests.

Disney Springs in Walt Disney World Resort is also preparing for a phased reopening to Disney guests, which will begin on May 20. So far, there are a handful of restaurants accepting advance reservations for May 20, including Wine Bar George, STK Orlando, and Wolfgang Puck Bar and Grill.

Are you excited to see Shanghai Disneyland reopen to the public? Do you currently have a trip planned? Let us know in the comments below.