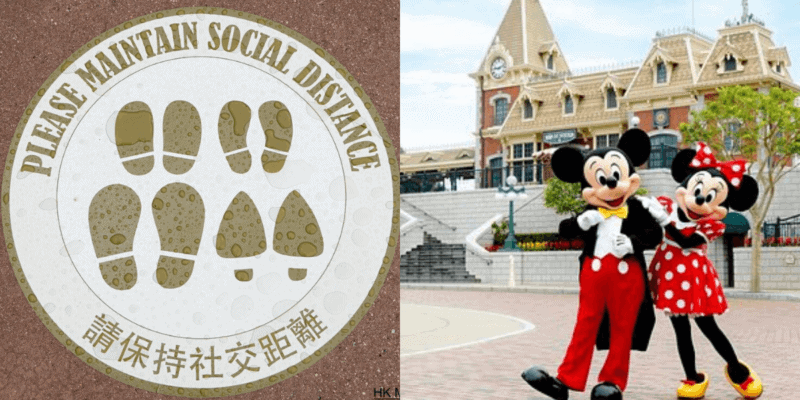 At Hong Kong Disneyland, we are now seeing tented checkpoints raised between the parking lot and the ticket kiosks in photos from Hong Kong Main Street Gazette.

It takes no stretch of the imagination to gather that these tents will be used to screen the health of every would-be guest that hopes to reenter the theme park. The resort has also used barricades and markers on the floor to help guide the would-be guests through the queue and into the park while maintaining proper social distancing.

Now, the implementation of these health screenings and social distancing measures at the Disney parks is not news. Shanghai Disney Resort has already made efforts on its own and both Disney’s Executive Chairman, Bob Iger, and CEO, Bob Chapek, have discussed implementing safety measures such as temperature screenings at the park entrances. But we are now getting a more finalized look at what the entrances to Disney Parks will look like.

Related: How Shanghai Disney’s Temperature Screening Could Be Implemented at U.S. Disney Parks

This scene is also the latest news to come out of a flurry of recent activity at Hong Kong Disneyland. While the resort still has not announced a reopening day, at least at the time this article is being written, more signs have been pointing an imminent reopening. Inside the Magic has reported that Hong Kong Disneyland has been testing reopening measures, and they have even tested character dining experiences with social distancing.

They also are starting to open up resort reservations beginning as early as May 8, 2020 even though no date has yet been announced for reopening.

Shanghai Disneyland will be the first Disney theme park to reopen after Shanghai Disney Resort successfully tested a reopening of its resort hotel and its retail and dining district, DisneyTown. It will welcome back a sold-out crowd on Monday, May 11.

Walt Disney World Resort in Orlando, Florida also recently announced that its own retail and dining district, Disney Springs, will begin reopening in phases starting May 20. While it also has not announced an official reopening date, it is possible to book a reservation at Walt Disney World as early as June 1, 2020.

Will you be visiting Hong Kong Disneyland when it reopens to the public? Let us know in the comments.