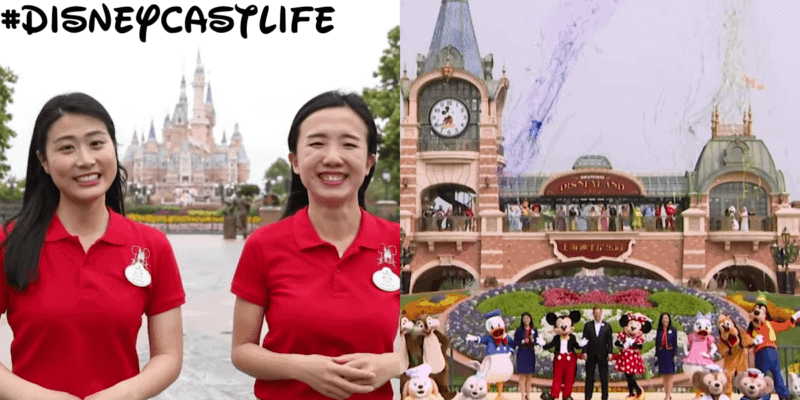 After closing its gates in late January, Shanghai Disney Resort has finally reopened to a sold-out–albeit limited capacity–crowd on May 11, 2020. And the Cast Members are just as excited–if not, more so–than Guests and Disney fans around the world.

In a very special edition of #DisneyCastLife, Disney Parks shared some insights into how the Cast Members in Shanghai Disney Resort prepared for the reopening. Those insights are shared in a video by Shanghai Disney Resort Ambassadors, Fiona and Eleven, and then Ambassadors from Disney Parks all offer the world take turns sharing a special message to the Shanghai Cast Members fortunate to be making magic once again.

Fiona and Eleven share their message on Mickey Avenue just before the official reopening of Shanghai, and they could not be more excited to welcome guests back to the park.

“Just a few days ago, we heard the news that Shanghai Disneyland was getting ready to reopen and we were so excited to get back here to make even more magic for our guests. We’re also thrilled to be able to share the happiness and joy of our reopening with guests and Cast Members across the world. Over the past few weeks, every Cast Member has been preparing for this day. So, we’d like to take this opportunity to say: Thank you!”

The ambassadors also said the talked with the other Cast Members at Shanghai Disney, and some of them were so excited for the reopening that they couldn’t sleep. But, can you blame them?

#DisneyCastLife is a social media segment created by the Disney Parks Ambassadors all around the world, and it is part of the #DisneyMagicMoments campaign to bring as much Disney magic as possible into the homes of would-be Guests.

Shanghai Disneyland is the first Disney theme park to reopen after the global pandemic forced every single one to shutter. Disney fans wait with bated breath to see which park will be next.

Comments Off on Shanghai Disneyland’s Reopening from Cast Members’ Perspective