Shanghai Disneyland Officially Reopens After Months-Long Closure - Inside the Magic 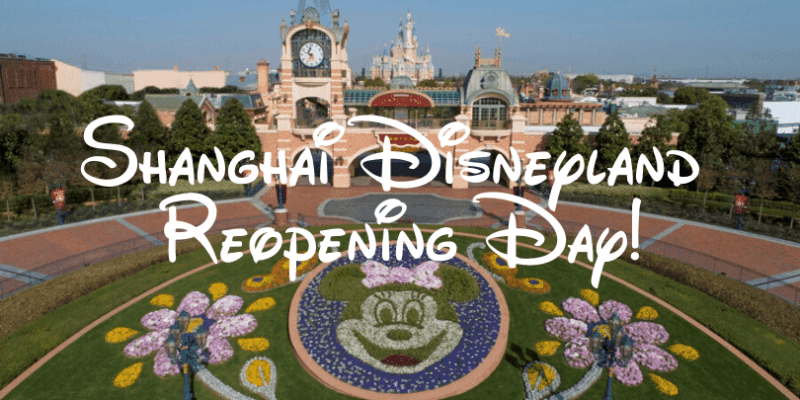 Today — Monday, May 11, at 9:30 a.m. local time — Shanghai Disneyland officially reopens to the public after a  nearly four-month closure. And because of Disney magic, guests were let into the park around one hour early.

Before the park reopened, tickets for the theme park sold out in minutes. Videos were released to show upcoming guests what they should expect in terms of health and safety protocols at the reopened park. And fans took to social media to share their excitement for the first Disney Park worldwide to reopen amid the current pandemic.

Though the theme park is only opening at a fraction of its regular capacity, that didn’t stop Disney fans from flocking to Shanghai Disneyland (or at least, fans who managed to snag their tickets to be there on reopening day).

During the reopening ceremonies, all of our favorite Disney characters came out to greet their loving fans and welcome us back to the Happiest Place on Earth as the Fantasmic! theme played (along with other Disney hits, like “Zip-a-Dee Doo Dah”).

The Marvel heros and Disney characters are welcoming the guests at Shanghai Disneyland. #ShanghaiDisneyland #Disney pic.twitter.com/4I954P7Cwd

Shanghai Disneyland is ready for reopening as COVID -19 has been under control ?#CHINA #Disneyland #Shanghai pic.twitter.com/n92XUWVD2w

Cast Members opened the theme park gates to guests just after 8:30 a.m. In the live video shared by The Paper, you can see guests roaming around the theme park awaiting the official opening of each of the lands (Disney stated originally that the park hours for reopening day would be from 9:30 a.m. to 7:30 p.m.). But with some Disney pixie dust, they were able to get on the attractions earlier than expected.

Shanghai Disney Resort President and General Manager Joe Schott gave an encouraging speech welcoming guests back into the park on reopening day. You can read the transcript below:

“For tens of billions of people around the world, a visit to Disneyland has been a source of never ending magic and happiness. It is a place to celebrate with loved ones, to travel to lands of fantasy to infinity and beyond, and to celebrate unforgettable memories that will last a lifetime.

”In recent weeks, however, the gates to these special worlds have been closed as we stand together to fight the global pandemic. But even in the toughest of times, the magic has always been here. It lives in the worlds of our imagination and inspires us to do great things, to be brave, and to overcome adversity.

“We see that same inspiration and passion in the determination and dedication of medical and other frontline workers across the country and around the world. It is their sacrifice which allows us to take our first tentative steps toward normalcy, and we’re all deeply grateful.

“We’re also grateful for the tireless dedication of our Cast, our partners, and the countless people behind the scenes who make the magic at Shanghai Disney Resort and our other sister resorts around the world.

”And finally, we’re grateful to our guests. It’s your passion which ignites the magical dream within all of us.

“We hope that today’s reopening can serve as a beacon of light across the globe, providing hope and inspiration for everyone, and demonstrate that we can overcome any challenge together.

Disney fans shared magical posts from Shanghai Disneyland’s reopening day on May 11, 2020. Believe us when we say that if we could be there experiencing the magic too, we would!

Currently, Shanghai Disneyland is the only Disney Park around the world to reopen amid the current pandemic, but it was also the first Disney Park to temporarily close. Hong Kong Disneyland, Tokyo Disneyland and Tokyo DisneySea, Disneyland Parks and Walt Disney Studios park, all four Walt Disney World parks (Magic Kingdom, EPCOT, Disney’s Hollywood Studios, and Disney’s Animal Kingdom), Disneyland, and Disney California Adventure all remain temporarily closed for the time being.

However, it is the reopening of Shanghai Disneyland that gives Disney Parks fans all around the world hope for a magical future. The Disney theme parks won’t be the same when they reopen — as Shanghai Disneyland demonstrates, there are necessary health and safety protocols that will be in place. But the Disney Parks will still posses the same magic we know and love. And they will always be there to welcome us home.

Which Disney Park are you most excited to reopen? Do you plan to head to a Disney Park on reopening day, or are you lucky enough to be at Shanghai Disneyland? Let us know in the comments!