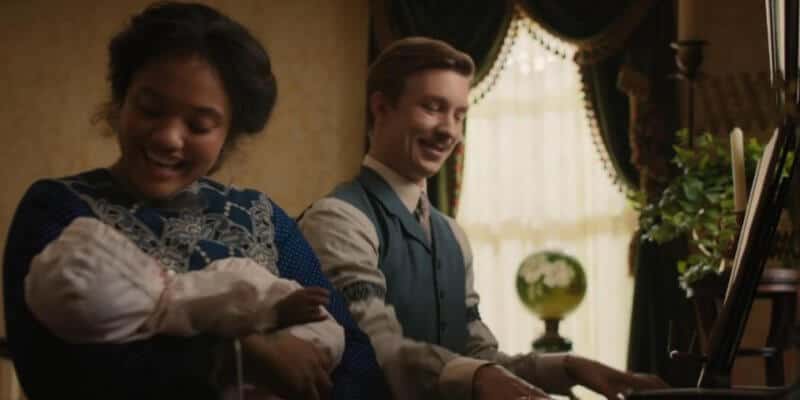 Disney’s live-action version of Lady and the Tramp debuts next week on the Disney+ streaming platform, and fans who haven’t yet seen a trailer for the new film might be surprised by some of the differences between it and the 1955 classic.

We’re not referring to huge differences in the plot or storyline. Rather, fans will notice a difference in certain elements of casting for the film and roles within the story.

For starters, in the live-action remake of the film, Jim Dear and Darling, played by Thomas Mann and Kiersey Clemons, respectively, are a bi-racial couple, and in the original animated film, the pair are a Caucasian couple. The newborn baby in the remake is obviously a bi-racial child, which differs from the baby in the 1955 animated feature. Aunt Sarah, who comes to take care of Jim Dear and Darling’s infant in Disney’s latest live-action remake is an African-American woman, played by the incomparable Yvette Nicole Brown, whereas in the 1955 animated feature, Aunt Sarah is an older Caucasian woman with silver streaks in her hair.

The infant child of Jim Dear and Darling in the remake is a baby girl, and in Disney’s original classic, the child is a boy.

Fans will also notice that in the storyline for the new film, Darling’s character is more dominant than her 1955 counterpart. Perhaps this is in keeping with the design of “strong female characters” many of Disney’s writers currently ascribe to yet it appears the roots of this change came in the initial casting decisions for the film. In the live-action adaptation, Darling is noticeably the head of her family, and it’s not because Jim Dear is incapable or unwilling to be the leader.

While on the set of Lady and the Tramp last year I had the opportunity to talk to Kiersey Clemons (Darling) about this and more. What she shared was really interesting:

INSIDE THE MAGIC: What can you tell us about your character?

KIERSEY CLEMONS: You see a lot more of Darling’s personality than you do in the original and that is cool because it gives me room to kinda build up who I think she is. I’m using my imagination a lot with like the times and this fantasy world of it being Disney and her being this young women of color. So I’m like OK how much of this is something that I can use to be a representation to all of the young girls who are going to watch it. So I’ve made her a lot more assertive and she wears the pants in the relationship. It has been fun this is Disney so I get to use my imagination and I see it as creating this world that it may not have been in 1910 for women or women of color particularly. I’ve made her everything that maybe women didn’t get a chance to be at that time. She is one sassy broad.

INSIDE THE MAGIC: How do you think this movie is different than other classic Disney movies, the version you are doing now?

KIERSEY CLEMONS: I think there is a lot of awareness in this movie particularly a lot of political awareness in terms of gender roles and the way that we see Jim Dear and Darling interact. With the baby and the dogs and the things they do around the house. So it’s really exciting to make a movie that is aimed towards kids and show them something that maybe they don’t see in their own home. Because it is Disney that gives us leeway to go as far as we want and create this dream world of what the world should look like and what households should look like. That is not something you always have the opportunity to do because a lot of times if it’s not a Disney movie you are watching things based on real life and you’re told ‘NO’ or ‘that doesn’t get to go because that wouldn’t really happen.’ But you can’t tell us that here because none of this would really happen – the dogs talk.

KIERSEY CLEMONS: I have more rights than a lot of women all over the world and I am aware of that. I think that although I have those rights there is so much scrutiny in our country and so much expectation that shouldn’t be there. Being able to have a medium like this and a space like this where you can say those opinions don’t matter here because we are in a different dimension – we are in “Disneyland” right now. Hopefully that transfers over to this dimension, but it is something that I recognized in the beginning and that was the biggest part of my excitement for the movie. I have so much freedom. Charlie allows us so much freedom and allows us to improve and play. That is also a win to have a director that allows us to do that and encourages that.

INSIDE THE MAGIC: Talk about the chemistry you have with your onscreen husband. Did you meet before?

KIERSEY CLEMONS: I meet Thomas at Sundance a few years ago and we ran into each other at photoshoots and we hav mutual friends so we were familiar with each other. We get along great and we have the same humor and I think we have the same aim like I was saying with gender roles. Because of that we have the same common goal our improv is always running in the same direction and that is nice and I feel very supported and I hope he feels the same way too. Thomas [Mann] is really funny and he comes up with a lot of funny stuff especially with the gender roles. He is on top of his game.

Fans will further notice some “dog diversity” too in that there is no Jacques in the live-action film. The gender of that role is different in the new film. Jacques has been replaced by a female Scottish terrier named Jock (voiced by Ashley Jensen) in the new movie.

Some of these differences between the live-action remake of Lady and the Tramp and the 1955 classic original are akin to the differences in casting for the live-action reimagining of The Little Mermaid, in which Halle Bailey—an African-American singer and songwriter is set to play the part of Ariel, the mermaid in the original animated feature film who displays Caucasian features.

This move on the part of Disney angered some fans who want the originals left as they are. Others applauded Disney’s choice in casting Bailey in the new movie and further applauded Disney for its efforts in promoting diversity in its new films.

Perhaps Disney is attempting to set the standard and the stage for future live-action remakes—a standard for diversity and inclusion in its new storylines–one in which characters are characters and not labels. Or perhaps these things are explained by Disney’s need to modernize some parts of the story. Maybe both of these things are happening because of a national conversation taking place about regarding other people as humans, not colors.

In a way, they can be one and the same—part of modernizing a storyline from the 1950s could mean casting actors and actresses of different ethnicities and backgrounds. It’s no surprise that mid-1950s America had much to correct in its racial bias—especially in Hollywood.

Inclusion and diversity seem to be the theme in many a conversation today—both publicly and privately. And if Disney is spurring that movement, it’s a good thing for every American, regardless of the entertainment giant’s reason for doing so.

Do you applaud Disney for casting actors and actresses of different ethnicities in its new adaptation of Lady and the Tramp, or do you think that the original animated films should be adhered to closely in the live remakes? Start a conversation in the comments section below.