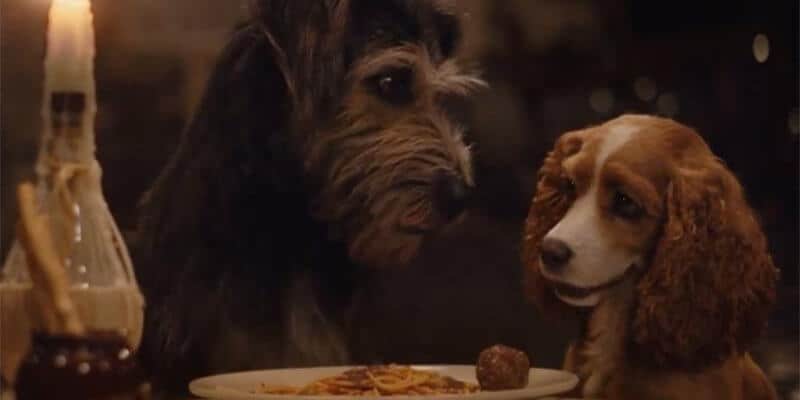 Inside the Magic has been holding onto a secret since last year when I had the opportunity to visit the set of the upcoming movie Lady and the Tramp. But today with lifting of the embargo we have a whole series of content in advance of the movies streaming service release on November 12th and we can share that Ken Jeong will be among the talented, star-studded cast of the upcoming Lady and the Tramp, the story of a lovely little dog and the tramp she falls in love with.

For months now, fans of the Disney classics have been anxiously awaiting the Disney+ premiere of the live-action remake of Disney’s animated Lady and the Tramp which was released in 1955. Up to now, we’ve had lots of news about several of Hollywood’s best who have lent their talents to Disney’s latest live-action endeavor, and we’ve been privy to an adorable trailer or two. But the news about Jeong was kept hush-hush.

Jeong plays the role of “Joe,” the doctor who delivers the new baby expected by Jim Dear and Darling in the new canine-themed movie, set to debut on Disney+ next Tuesday, November 12.

He is perhaps best known for his role as drug lord Leslie Chow in the popular The Hangover film series and as Professor Ben Change, the Spanish teacher, on the NBC hit sitcom Community, which aired from September 2009 to June 2015. Ken Jeong reunites with his Community co-star, Yvette Nicole Brown, who plays the part of Aunt Sarah in the new reimagining of Lady and the Tramp.

While on the set of Lady and the Tramp Ken Jeong filmed a scene with Thomas Mann who plays Jim Dear, Darling’s husband. In the scene, Ken Jeong who plays the doctor has delivered the couples, new baby. As we know from the original movie it’s the arrival of their new child that leads to Lady, our cocker spaniel star, being kicked out of the house and the romance between her and the terrier mix Tramp.

Watching Ken Jeong perform was one of the trip’s highlights and I can’t wait to see which version of his performance makes its way into the film. The accomplished comedian delivered both scripted and unscripted lines and in each version, we see the humor we’ve loved from his Ben Chang (Community) or Leslie Chow (The Hangover) performances. In some of the takes, he plays a tired doctor enduring the questions of a clueless father while in other takes he actively makes fun of Jim Dear, who fails to grasp the joke given his excitement as a new father.

And we can confirm that the iconic spaghetti scene was not scrapped. (No pun intended) Tony and Joe from Tony’s Restaurant are also on hand to serve up pasta and help make the “bella notte” even more “bella.”

We can’t seem to get a definitive answer on whether those evil Siamese cats will play a role in the reimagined story, so we’ll have to wait until next week to find out for ourselves. Unlike Disney’s remake of The Lion King, which only used CGI animals, Lady and the Tramp relied heavily on a troop of real dogs for the film’s canine contribution of characters–many with interesting real-life rescue-inspired backstories.

Jeong is a licensed physician–now embracing the role of a fictional doctor for Disney’s new live-action feature—but he hung up his stethoscope for a career in comedy, as it became apparent that he had quite a knack for making audiences’ sides split with his unique and often stone-faced humor.

Jeong and Brown join an uber-talented cast in the new film that will forgo a theatrical release in exchange for an exclusive debut only on Disney+ the same day the new streaming platform launches. The film features Tessa Thompson as the voice of Lady, an upper-class Cocker Spaniel, Justin Theroux as the voice of the ragamuffin Tramp, Sam Elliott as the voice of Trusty and Janelle Monae as the voice of Peg. Kiersey Clemons and Thomas Mann play Darling and Jim Dear, respectively, and Ashley Jensen lends her voice to Jock, the adorable Scotty dog in the film.

The human cast joins forces with an adorable—and talented—canine cast sure to tug on the heartstrings of unsuspecting Disney fans when the feature film drops onto the Disney+ platform November 12.

How do you think Ken Jeong will perform in his first Disney film and will you be streaming Lady and the Tramp as soon as Disney+ the new Disney streaming service launches? Let us hear from you in the comments section below.

Comments Off on JUST REVEALED: Surprise cameo coming to Lady and the Tramp