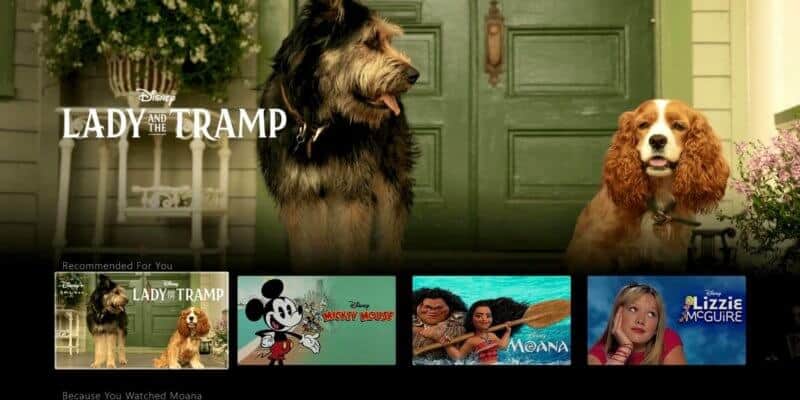 A screengrab of the Disney+ interface, featuring the upcoming live-action "Lady and the Tramp" remake. Credit: Disney

As of right now, it seems the entire Disney fan universe is somewhat divided when it comes to its love affair with the myriad of Disney’s new live-action remakes. Some fans are 100% on board with the trend while others are, well, less than amused.

Perhaps Disney’s new take on the 1955 classic “Lady and the Tramp” will be the olive branch across the proverbial aisle. Why? Because there are some things about the new canine remake that set it apart from other live-action projects from Disney so far. Here’s what we know right now.

Release Date and the reason behind it

The live version of “Lady and the Tramp” will be released on November 12, 2019, the same day that Disney’s new streaming service becomes available to the general public. How convenient! So it’s no wonder that the release of the new feature is slated only for Disney+, and not for the big screen so far. As it stands right now, if you want to see Lady and Tramp in their live-action debut, you’ll have to subscribe to Disney+ (or have a really good friend who does and invites you over). Disney CEO Bob Iger says there was never any talk of making the feature film for the theater, but then again, Disney knows that at least a short theatrical run is needed in order to have a shot at an Oscar or two.

Several very well-known Hollywood icons will lend their talents to bringing the characters to life. Tessa Thompson will give Lady her voice, and Justin Thoreaux will bring Tramp to dazzling life. Sam Elliott will be the voice of Trusty the Bloodhound, “Don’t recollect if I’ve ever mentioned that before,” and Benedict Wong will voice a new character, Bull the Bulldog. Janelle Monae’ will lend her vocal talents to Peg the Spaniel, and she will also write two new original songs for the feature. Ashley Jensen will play the voice of Jackie, a Scottish terrier (instead of Jock), and Yvette Nicole Brown will be the somewhat vicious Aunt Sarah.

Spaghetti or no spaghetti?

As of now, it’s not clear whether the iconic spaghetti scene will be part of the new remake. (Heck, there’s not even a trailer out yet!) The scene from the 1955 film involves a plate of spaghetti, Tony’s Restaurant, “Bella Notte,” and a sweet romance between the blushing Lady and her new beau. Come on Disney; it’s just not “Lady and the Tramp” without the spaghetti. And don’t forget the meatball!

With all the live-action remakes Disney has produced, “Lady and the Tramp” will have some competition, but then again, what’s sweeter or more “Disney” than the love story between two pooches?

Which of Disney’s live-action remakes is your favorite so far? Are you looking forward to “Lady and the Tramp?”