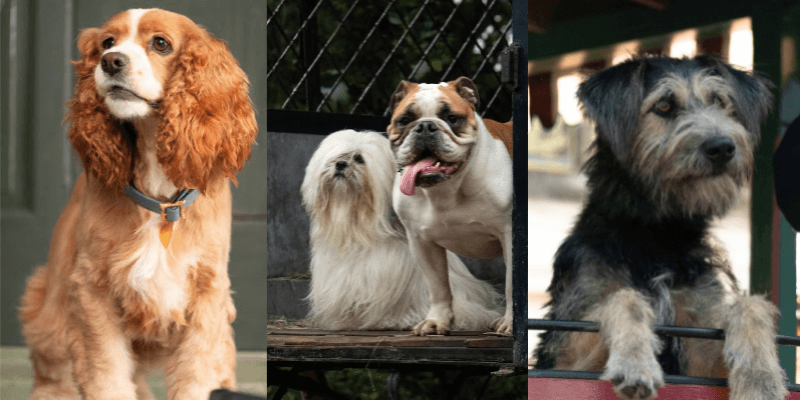 If you’re one of the many fans of Lady and the Tramp who are anxiously awaiting its debut on the Disney+ streaming service on November 12, you’ve probably read a lot about the upcoming release—hopefully here at Inside the Magic.

We brought you the names of the acting cast and the voice cast for the new live-action film, and we brought you the first facts about the new feature, including the fact that Lady and the Tramp will be the first live-action feature film to forgo a theatrical release and instead drop exclusively on Disney’s new streaming platform. And then we introduced you to the delightful doggies who’ll be playing Lady and Tramp.

But details about how Disney found and trained the doggy duo and their canine compadres are as interesting and exciting as anything else you’ve heard about the new film.

Unlike Jon Favreau’s adaptation of The Lion King and the live-action remake of The Jungle Book, directors and writers of Lady and the Tramp wanted to steer away from the use of CGI-rendered animals and use real dogs as much as possible. Obviously, the lip movements on the two pooches are a product of CGI innovation, but the live reimagining of the 1955 classic animated film largely used live animals in its filming.

And Disney didn’t run out and hire trained animal actors. Not hardly. Instead, according to director Charlie Bean, the two perfect dogs they found named Rose and Monte that play the furry characters of Lady and Tramp, respectively, were rescue dogs and started out not knowing a thing about the canine acting world.

“I met both of them right when they came into all of our lives,” Bean explained. “They were not trained at all, and [now] they are incredible actors.” Perfect dogs, indeed.

Rose, the delightful cocker spaniel who plays Lady, was the first of the animals to be cast. According to those who saw her first, she got the part because of her floppy ears and soulful eyes. It was after the team found Rose that Mark Forbes, the animal coordinator for the film, poured over multiple animal adoption sites.

It took him a while, but soon, he found Monte a terrier mix. He was eight months old at the time and had been found wandering the streets of Las Cruces, New Mexico before he was rescued and transferred to Halo Animal Rescue in Arizona eventually finding a home on the set of Lady and the Tramp.

Two additional cocker spaniel rescue dogs were found to support Rose plus two terrier mix rescue dogs to support Monte. These dogs replaced Rose and Monte in the movie when specific scenes that required a different demeanor would be helpful. This also helps explain how rescue shelter dogs without prior training were able to perform so many of the trained skills we see in the movie.

“[Rose] is definitely the more business one, where [Monte] is kind of goofy and just happy to be there,” Forbes shared.

There are a few other dogs that were cast in the film. One is a bloodhound who plays Trusty, voiced by Sam Elliott, a bulldog who plays Bull (voiced by Benedict Wong) a Scottish terrier who plays Jock thanks to the voice talents of Ashley Jensen and the fluffy dog who plays the soulful Peg (voiced by Janelle Monae).

Many of the dogs cast in the new film have a story that involves someone coming to their rescue, quite literally. And for those of you wondering these dogs will not return to the animal rescue after filming as they all found their future home among the movie’s cast and crew.

When training began for the animals, the animal trainers used basic commands like “sit” and “stay.” But then the dogs graduated to more complex commands, especially for those times when a scene called for trained behaviors like stretching, running and jumping.

Because trainers understood that if they held treats in their hands while giving the dogs a command, the canines would inevitably stare at the animal trainers’ hands, instead of where they need to have their gaze – looking into the eyes of the human actors. So the trainers got very creative and using a pair of cheap sunglasses with the lenses removed they attached a plastic fork around the nose piece.

Affixed to the fork was a treat for the dog who was learning a new command. This forced the dog to look at the animal trainers or actors in the eyes instead of the hand. Over time, as the dogs learned the commands, the gadgets and treats were removed and the dogs knew to look at that person during that part of the filming.

Pretty ingenious, right? For only a few dollars you can train your doggy in the same way.

For the actual “kiss” between Lady and the Tramp, trainers found that cooked spaghetti broke too easily, so instead, the props team decided to use vanilla licorice. (Hey, not a bad trade!)

“You shoot it, and you’ve literally worked on this for two months,” Forbes said with a sigh, “and then it’s over in 30 seconds.”

Filming these live-action remakes can be “ruff” sometimes. We think Forbes would agree. The new live-action movie from Walt Disney Pictures comes to Disney+ on November 12.

Do you like the idea of training your pup to look you in the eyes giving the illusion of authentic human and animal conversation? What about the decision to use shelter animals? What was your favorite tidbit?

Comments Off on Dog training secrets from Lady and the Tramp (use these to train your dog too!)